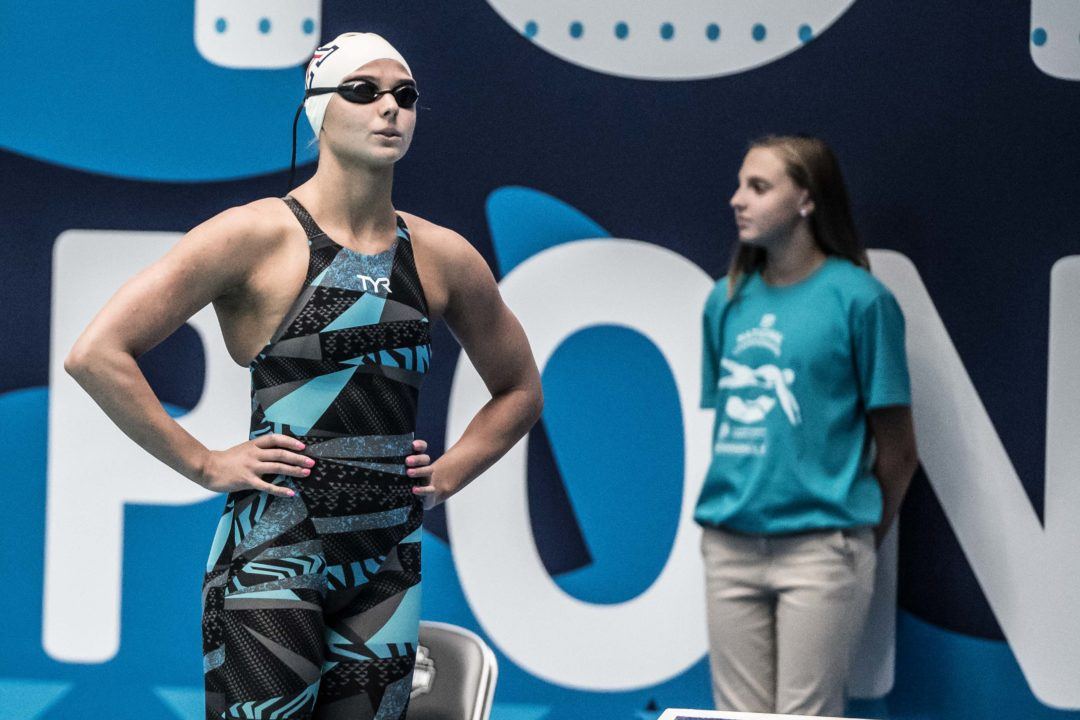 The Italian-based Aqua Centurions, one of the ten ISL teams competing in season two, continue to re-load their sprint group with the addition of American sprinter Katrina Konopka. Konopka joins Brazilian Etiene Medeiros and Italian Sara Franceschi as newcomers for the team’s 2020 women’s roster.

Konopka’s recent signing could signal potentially replacing Aussie flyer Madeline Groves, who signed to the squad this season. The Australian government has implemented pandemic travel restrictions that could prevent Groves’ participation this season. Notably, the London Roar has already faced a massive withdrawal of their Aussie swimmers because of the country’s strict measures.

This doesn’t necessarily mean that Groves is out, however. With 16 roster spots available for women,

Before her collegiate career at Arizona, Katrina Konopka set both short course and long course YMCA national records in the 50 and 100 free back in April and August 2015. Her SCY times of 22.19/48.50 and LCM times of 25.65/56.05 still stand today. After her explosive YMCA performances, Konopka made an immediate impact her freshman season at Arizona with her two finals swims at the 2016 Pac-12 Championships and contributions to 3 NCAA All-American relays at that year’s national championships.

She was then selected to the 2016 Short Course World Championships roster, where Konopka swam prelims of the gold medal-winning 400 free relay as well as contributing to the winning 200 medley relay. Konopka put up an anchoring 50 free split of 23.93 during the medley relay final, which contributed to the then-world record of 1:43.27. Konopka also swam the finals of the 200 free relay, splitting a 23.82. However, the relay’s finishing time of 1:35.86 just missed the podium.

A year later she was selected to the 2017 World University Games roster, initially scheduled only for the 50 free. Konopka put up a 25.21 to earn bronze in the 50 free final behind American winner Caroline Baldwin. Her efforts allowed her a finals spot on the 400 free relay, which earned a bronze medal. Konopka wrapped up her collegiate career at Arizona in 2019 with best SCY times of 21.71/48.13 and three CSCAA All-American honors.

The 23-year-old’s addition to the Aqua Centurions aligns with the team’s campaign to reload their sprint crew. With the loss of Britain’s Freya Anderson, Konopka would fill in her sprint spot. At the ISL London European Derby meet, Freya Anderson put up 24.24/52.18 in the individual sprints as well as anchoring 51.35 for the 2nd place mixed 400 free relay. Likewise, Federica Pellegrini, Larissa Oliviera, and Lidon Munoz all split sub-53’s during the 400 free relay. Konopka’s SCM best of 53.69 hails all the way from her performance at the 2016 SC Worlds meet. Likewise, Silvia di Pietro placed 8th in the 50 free race with a 24.70. Konopka’s best 50 free time of 24.76 also is from more than 4 years ago.