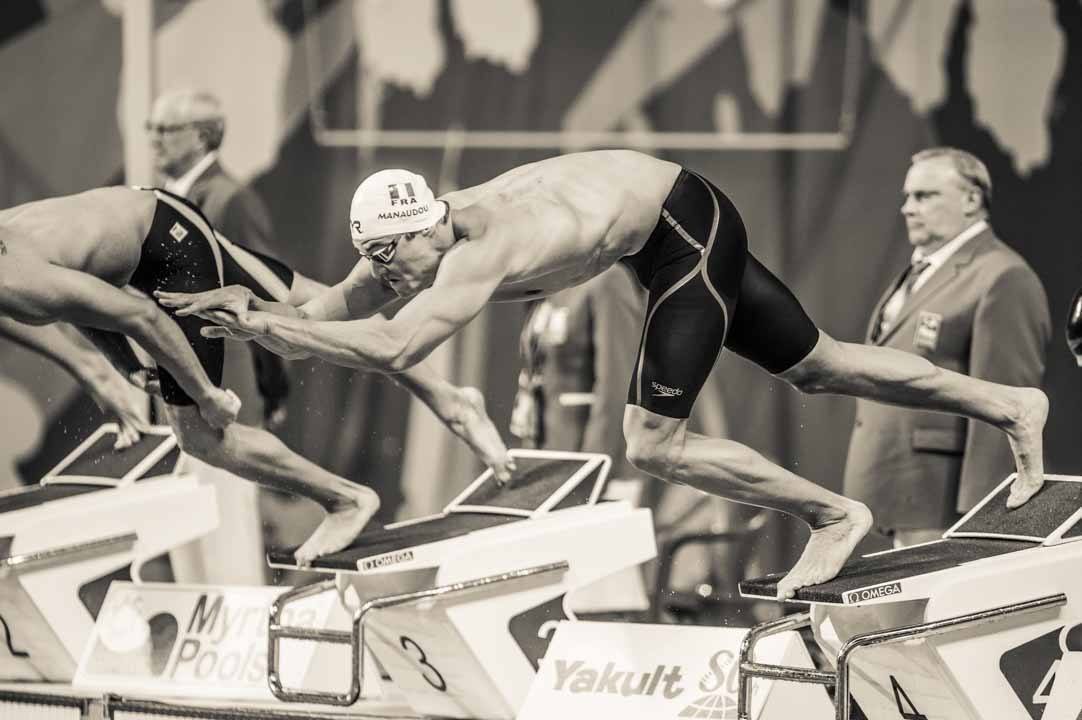 The 6th and final day of the 2016 French Elite National Championships will feature the much-awaited 50 freestyle. Archive photo via Mike Lewis/Ola Vista Photography

Top-seeded Camille Gheorghiu of Montpellier Métropole/Antibes put up a 2:15.14 to lead the morning’s qualifiers through the first three heats of the 200 back. She was seeded with 2:12.14. Gheorghiu remains very disappointed with her 100 back performance and is hoping at least to qualify for European Championships tonight. Lara Grangeon of Calédoniens/Font-Romeu had a nice morning swim, coming within 7/10 of her seed time with 2:16.72 for second. AS Monaco’s Lisa Pou dropped 1.2 seconds to jump from ninth seed to the third-fastest of the morning in 2:16.78.

Auriane de Premilhat of CN Marseille came within .05 of her best time and clocked a 2:17.13 to land in the fourth spot. Pauline Mahieu, from St-André/Font-Romeu, went 2:17.57 for fifth. The 17-year-old Mahieu was being hailed as the next great French backstroker last summer when won a bronze medal in the 100 back at Baku, but she has struggled in this meet and has yet to go a best time.

Fantine Lesaffre of Mulhouse took sixth in 2:17.94; she was seeded second with 2:13.63. Anaïs Podevin of Dauphins Toulouse dropped 4/10 to qualify top eight with 2:17.97. Cyrielle Duhamel of Stade Béthune Pélican Club was the eighth time of the morning, going 2:18.08. If no one in the B flight goes faster she will be assured of lane 8 tonight.

Ophélie-Cyrielle Etienne of Lille Métropole/Marseille scratched the event. She had been seeded fifth.

Mehdy Metella, the defending champion and French record-holder in the distance, had an excellent morning swim to lead the field after the first three heats. Although he won the 50 fly on Saturday, Metella still had a bitter taste in his mouth from Friday’s 100 free, which he described as a terrible performance. This morning he had hoped to be around 52.3 but he ended up with 51.94, miles ahead of the competition. Out in an easy 24.8, Metella blew away the field on his wall and brought it home in 27.1. He looked comfortable in the water and could have a very nice swim tonight. Although Metella has been 51.24 (when placed fifth in Kazan last summer), he lamented earlier in the week that it would be challenging to match that time without the same level of competition.

Indeed, the second qualifier out of the first three heats of the morning was Joeri Verlinden of Netherlands, who won the second heat in 53.06, about a second off his seed time. A relaxed Jérémy Stravius of Amiens, who scratched the 50 free later in the morning to swim the 100 fly, went 53.28 to qualify third; Stravius was within a half-second of his seed time.

Jordan Coelho of Vanves/Antibes, the 200 fly specialist, qualified fourth in 53.48, only 3/10 away from his entered time. Paul Pijulet of Dauphins Toulouse, who finished second to Metella in the 50, dropped 7/10 to vault from 13th seed to fifth qualifier with 53.71. Flavien Aubry of Créteil Natation came within 1/10 of his time to earn the sixth qualifying spot with 53.78. Barring faster times from the B flight, Paul Lemaire of Dauphins Toulouse (53.93) and Marvin Maisonneuve of Montauban Natation (54.13) will occupy the outside two lanes in tonight’s final.

American Kelsi Worrell, who is ineligible for the final since it is a relay selection event for Rio, put everything she had into her morning swim and came up with a lifetime-best 54.37, an improvement of .36. Mathilde Cini of Valence/Marseille led the top eight qualifiers out of the A flight with 54.92, her best by 6/10. The defending champion and presumptive favorite, Charlotte Bonnet of Nice, qualified second in 55.17. Her teammate Anna Santamans, swimming in the next lane, was just behind in 55.28, only 3/10 off her seed time.

Béryl Gastaldello of CN Marseille, last year’s runner-up to Bonnet by only .04, went 55.50 to qualify fourth. Lena Bousquin of Bordeaux Bastide took more than a half-second off her time to post 55.51 for fifth. Margaux Fabre of Aqualove Sauvetage Montpellier (55.71), Cloé Hache of Nice (55.85), and Assia Touati of Dauphins Toulouse (56.07) rounded out the top eight.

The French 4×100 free relay qualified for Rio in Kazan, but its four members will have to swim an average of 54.41 each tonight in order to earn the trip. The top four women didn’t make the add-up time in the 4×200 but have a better chance here.

This is just such a tight event in France that you never know who you will see in the final. With one exception: Florent Manaudou of Marseille will be in lane 4.

The first heat had an empty lane 5 that had been reserved for Stravius, who chose to make a run at the 100 fly title instead. Eddie Moueddene of Amiens (22.58), Marseille’s Fabien Gilot (22.74), and Ganesh Pedurand of Dauphins Toulouse (22.93) all qualified for tonight’s final out of that heat. Both Moueddene (-.13) and Pedurand (-.15) dropped time in prelims.

The second heat pitted Marseille teammates Clément Mignon and Frédérick Bousquet against each other in the middle lanes; a third teammate, Grégory Mallet, scratched. 35-year-old Bousquet came within .03 of his seed time to win the heat in 22.39 for the second-fastest time of the morning. Mignon went 22.55 second in the heat and fourth overall.

The last three qualifiers for tonight’s A final came out of the third and final heat of the morning. Manaudou led with 21.92. Yonel Govindin of Dauphins Toulouse went 22.41, only .11 off his seed time, to qualify third overall. EMS Bron’s Nosy Pélagie was third in the heat and fifth overall with a 22.57.

Fanny Deberghes of ASPTT Montpellier earned the title of French national champion but missed the time she was aiming for, going 31.97 to win the women’s 50 breast. Deberghes was hoping for a ticket to European Championships in May in her third attempt; she was short of the qualifying time in both her 100 and 200 breaststrokes earlier in the week.

Adeline Williams of Toulouse went 32.23 for second place, ahead of teammate Solène Gallego (32.45), who improved her time by .06.

Coralie Dobral of Montpellier Métropole, bronze medalist in the 100 breast, went 32.48 for fourth. Canet 66/Font-Romeu’s Nolwenn Herve was fifth with 32.67. Alexia Gernouillat of Fos-sur-Mer came in sixth in 32.78. Emma Drhouin of ASPTT Toulouse dropped .16 to go 32.83 for seventh, and Carmella Kitching of Montauban/Nice went 33.03 for eighth.

Current record-holder Sophie De Ronchi Turban of CNS Vallauris was ninth in 33.03, moving up 9 spots and dropping .38 from her seed time.

In the last heat of the morning, with all his teammates from Marseille cheering him on, French record-holder and defending champion Giacomo Perez Dortona won the 50 breast with 27.78, exactly the time he needed to snag an invite to European Championships. It was a positive end to the meet for Perez Dortona, France’s top 100 breaststroker, who’d had a hugely disappointing 100 final in which he finished third with a time that was way off where he expected to be.

Thomas Dahlia of Antibes came in second in 28.30, an improvement of .09 over his seed time. Thibaut Capitaine of Cergy Pontoise was third in 28.44.

Logically Manaudou ahead of Mignon and Bousquet in final.
Manaudou will try to rebound with a huge time. And Mignon will try to swim the qualifying time of 21.82. Based on his 100 free, it doesn’t look out of reach. The old Bousquet was pretty good in the 100 free and will try to break 22 once again.