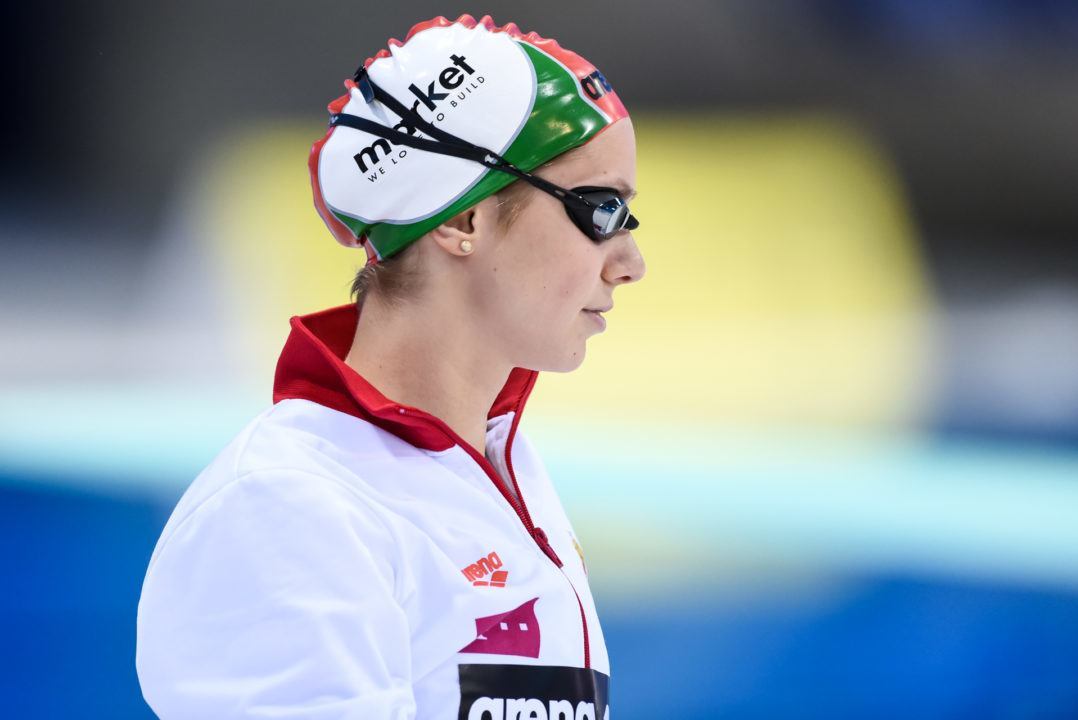 Boglarka Kapas rocketed her way to first in the world in the women's 1500 free this morning, debunking the old top time by 18 seconds. Current photo via Peter Sukenik/www.petersukenik.com

This morning, defending Olympic champions Florent Manaudou of France and Ranomi Kromowidjojo of the Netherlands eased their way through the prelims of the 50 free. Tonight, they’ll attack the semifinals with the hopes of setting up a good lane for tomorrow night’s finals.

Spain’s Mireia Belmonte Garcia comes into the final of the women’s 1500 as the definitive favorite, after swimming nearly 14 seconds ahead of the competition in prelims (16:14.74). Meanwhile, Italy’s world record holder in this event Federica Pellegrini is the strong favorite to win the women’s 200 free, after clocking 1:56.73 in semis. Mie Nielsen holds a strong lead in the non-Olympic women’s 50 back tonight, with a 27.73 in prelims

There should be some tight races for gold tonight on the men’s side. The men’s 200 back will be a battle between Lithuania’s Danas Rapsys and Poland’s Radoslaw Kawecki, who were separated by just .04 in semifinals: 1:57.35 to 1:58.39. Also tonight, world record holder Adam Peaty will take on the men’s 50 breast.

Hungary’s Boglarka Kapas blasted her way to the top of the world rankings in the women’s 1500 free tonight, swimming a full 18 seconds ahead of her challenger Mireia Belmonte Garcia of Spain, who also swam her season-best. Kapas’s 15:57.29 shot down Garcia’s championship record from 2014, outswimming it by a full seven seconds.

Kapas held the lead throughout the (unfortunately) non-Olympic race, steadily building as it went on. The duo now top the world standings, although it’s worth mentioning that American Katie Ledecky, who swam a 15:25.48 at FINA Worlds last year, has not swam the event this season.

Earlier this week, Kapas also won the 800 free, and she sits fourth in the world in the event, which will be contested in Rio this summer.

Garcia, despite missing the chance to repeat her title, improved her season-best by eight seconds. Her teammate Maria Vilas Vidal made a huge jump in the rankings from 6th to third. If it weren’t for the two swimmers ahead of her today, Vidal would have scored the fastest time this season.

With today’s fourth-place 16:08.67, Slovenia’s Tjasa Oder moves to fourth in the world rankings.

With Lithuania’s Ruta Meilutyte sitting this event out, Sweden’s Jennie Johansson will go into the women’s 50 breast final tomorrow as the top seed. Johansson was the 2015 FINA World Champion in this event. She didn’t quite hit her season-best, a world 7th-ranked 30.71 from Australian Champs in April.

Finland’s Jenna Laukkanen made her first foray under 31 this season tonight for second place with 30.81. That time moves her up to tenth in the world. The bronze went to Hrafnildu Luthersdottir of Iceland in 30.83, 11th in the world.

The rest of the top eight all made times that cracked the world top 25, including Natalia Ivaneeva and Martina Carraro, who tied for eighth place. Most likely, a swim off will determine which athlete makes the A final.

Hungary’s defending world champion in the 200 distance Laszlo Cseh became the first swimmer this season to dip under the 51 mark in the 100 fly with his 50.86 tonight, topping the world rankings and taking down the championship record.

With tonight’s swim, Cseh cuts .54 seconds from his season-best and bypasses Michael Phelps, Poland’s silver medalist Konrad Czerniak, China’s Zhuhao Li, and South Africa’s Chad le Clos on his way to the head of the rankings.

Czerniak also improved his season-best with 51.22 for silver tonight. With that time, Czerniak, the previous championship record-holder, leapfrogs ahead of Li for third in the world.

The third place slot went to Mehdy Metella of France in 51.70, which ranks him 12th.

Both women missed their season-bests. Pellegrini is currently ranked fourth in the world with her 1:55.30 from Italian Nationals in April, while Heemskerk holds eighth with her 1:55.85 from Eindhoven last month.

The three were well ahead of the field. Fourth went to Melanie Costa Schmid of Spain in 1:58.08.

France’s defending Olympic champion Florent Manaudou will be the top seed in the men’s 50 free tomorrow, after clocking 21.64 in semifinals tonight. That time falls just .12 off his season-best, a 21.42 from the French Open that ranks him second in the world, behind only Bruno Fratus’s 21.37 relay lead-off from the Brazil Open in December.

British record holder Ben Proud was .2 behind Manaudou in 21.84. Proud’s season-best is a 21.65 from British Olympic Trials that ranks him 5th in the world.

Greece’s Kristian Gkolomeev scored the third seed tonight with 21.89, his season-best by .01.

The Brits scored a pair of medals and a championship record in the women’s 50 back, with Fran Halsall leading the way in 27.57. That time takes down the 6-year-old championship record set by Belarus’s Aliaksandra Herasimenia in 2010 by .07 seconds. Halsall’s swim tonight takes .23 off her season-best, moving her from eighth to seventh in the world. She will be representing Great Britain in her third Olympics this summer.

Halsall’s move in the world rankings jumps her ahead of Denmark’s 2012 Olympian Mie Nielsen, who scored second place tonight with 27.77.

Team GB’s other medal came from 2012 Olympic semifinalist in the 100 distance Georgia Davies, who swam the race in 27.87 for 11th in the world rankings.

2015 World Championships runner-up in this event and 2012 Olympic fourth-place finisher Radoslaw Kawecki of Poland took the win in the men’s 200 back by a second. His swim tonight drops well over a second from his season-best and moves him from 20th to sixth in the world rankings.

Israel’s 2012 Olympian Yakov Toumarkin finished second in 1:56.97, moving up ahead of names like Leonardo de Deus, Grigory Tatsevich, Arkady Vyatchanin, and Matt Grevers to 14th in the world rankings.

Italy’s Alessia Polieri turned in the top time in the 200 fly semis tonight, swimming a 2:07.49 season-best for 11th in the world.

Hungary’s Liliana Szilagyi finished second in 2:08.63, but Germany’s Franziska Hentke, who hit the wall third, will be the favorite tomorrow night. Hentke, the 2015 European short course champion in this event, currently sits second in the world with her 2:05.77 from German nationals earlier this month.

World record holder Adam Peaty was the definitive champion of the men’s 50 breast, coming in over half a second ahead of the field with 26.66. His swim tonight matched his swim from yesterday exactly, another 26.66 that marks the fastest time in the world this year.

Slovenia’s Peter John Stevens of the University of Tennessee made a big jump in the rankings with his silver-medal 27.09, moving from seventh to third in the world.

Britain’s other medal came from this week’s 200 breast champion Ross Murdoch in 27.31.

Fran Halsall asserted her sprint dominance for the second time tonight in the semifinals of the women’s 50 free, where she outswam defending 50 and 100 free Olympic champion Ranomi Kromowidjojo of the Netherlands. Halsall finished in 24.21, and Kromowidjojo hit in 24.37.

Tonight’s swim marks a season-best for the third-in-the-world Halsall, whose previous best was a 24.23 from Marseille. Kromowidjojo just missed her season-best 24.36 from Eindhoven.

The duo will fight it out for the European championship tomorrow night. The swim will be a good preview of what’s to come in Rio, featuring two of the world’s top five. In Rio, these two women will take on the Campbell sisters of Australia  and Sweden’s Sarah Sjostrom along with a host of talent from around the world for the sprint title.

They will most likely be unopposed by the rest of the field, as third-place Anna Santamans of France was nearly half a second back in 24.83.

Italy’s anchor leg Gabriele Detti had the fastest split out of the field, a 1:45.39 that edged his team .01 seconds ahead of Poland for the bronze. He was joined by Andrea Mitchell D’Arrigo, Filippo Magnini, and Luca Dotto.

French TV doesn’t care at all about the women’s 1500 free. They don’t show the race. Not the first time there’s no respect for distance swimmers.

Be grateful! Some prat of a”coach” did this irritating piercing whistle throughout the entire race and ruined watching it with sound. In don’t know if his / her swimmer had any need of it but I’d have told him /her to leave the poolside. Self indulgent nonsense!

Yeah, what’s up with piercing whistles at swim meets? I’ve noticed similar sounds on livestreams from meets in the US. Kind of drives me bonkers. Maybe it’s the sort of thing that blends in when you’re there, but when it happens to be near the microphone … yikes.

In breaststroke it’s supposed to help with pacing. I don’t know why people would do it during a 1500 though, that’s just obnoxious

Miracle! They show the last 250m. Kapas is gonna win ahead of the 2 Spanish swimmers.