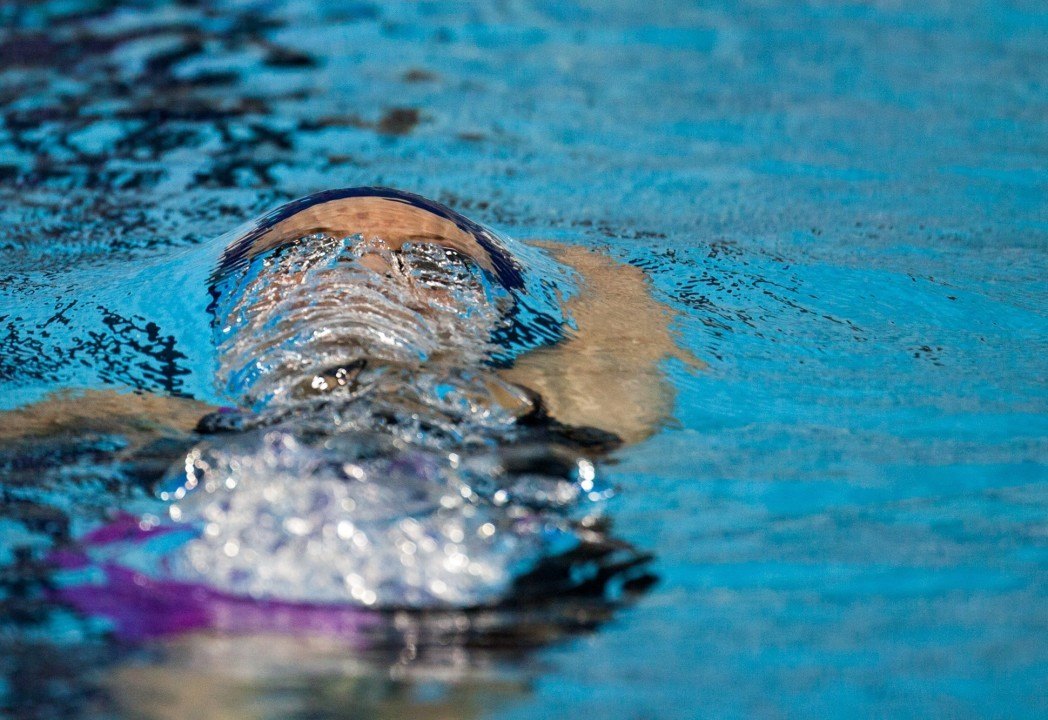 Ryan Hoffer won Composite Junior National titles in the 100 fly and 100 back on Friday, leading the West meet to a 16-8 advantage over the East.

Madison Homovich of the Raleigh Marlins jumped out to an early lead that continued to build as the women’s race unfolded. In the end, she touched in 16:09.63, nearly nine seconds ahead of second place swimmer Kendall Brent of Swim Florida who finished in 16:18.52. Fourteen year old Madelyn Donohoe of The Fish placed third with a time of 16:21.09.

Dynamo’s Emma Layton, the top seed out of this morning’s heats, finished sixth. The top seven swimmers cracked the Summer Juniors cut of 16:35.89.

The men’s race seemed to be dead even at first with five swimmers lined up in a row. However, Spencer Lafata of Badger Aquatics took charge at the 700 and began to build a lead. SwimAtlanta’s Taylor Delk responded by attempting to close the gap, a move which proved successful by the 1000 mark. Delk split a series of 27-high splits to take the win in 15:16.42 over Clayton Forde of Lakeside Aquatics (15:21.51).

Surprisingly, Ford missed the podium, as T.C. Smith of the Sarasota Tsunami swim team posted a time of 15:16.96 in the morning heats, followed by a 15:19.65 by Trey Freeman out of the same heat. These results are a bit of an anomaly, as it is rare to see the majority of the podium claimed by swimmers from the earlier heats.

Kaitlin Hardy went out in a quick sub-54 split to grab the win in a time of 1:51.27. Hardy managed to take revenge over 100 backstroke champ Alex Walsh of the Nashville Aquatic Club after falling by only .05 seconds last night. Walsh took second in 1:52.07, followed by Lakeside Swim Team’s Asia Seidt (1:53.79).

After a meet-record 100 backstroke last night, Ethan Young of Carpet Capital Aquatics looked incredibly strong through the first 150 yards, gaining a body length lead on Dynamo’s Michael Taylor. However, Taylor posted a last 50 split of 25.74 to Young’s 28.01, allowing Taylor to claim the win in 1:41.94. Young fell to second in 1:43.52.

Nathan Murray of SwimMAC Carolina put in a strong race to claim bronze in 1:44.13. The top 19 swimmers squeezed under the Summer Juniors cut of 1:48.39.

The top 9 swimmers touched under the Summer Juniors cut of 49.89.

Raiz Tjon-A-Joe of Azura Florida Aquatics sprinted out to an early lead in 20.72. However, 200 champion Upper Dublin’s Michael Jensen proved to be victorious, using a strong back half to race into the 100 at 43.64. Only Jensen got his hand on the wall under 44, with Tjon-A-Joe holding on for second in 44.03.

Tyler Rice of the Bolles School Sharks nabbed bronze in a personal best of 44.22. Only 6 swimmers were able to get under the Summer Juniors cut of 44.59.

Top two 100 breaststrokers Allie Raab of Nashville Aquatic Club and Kennedy Lohman of the Lakeside Swim Team touched dead even at the 100 in 1:02.60, but Raab pulled ahead the last 75 to claim the win in 2:09.69. Raab’s swim not only granted her a Junior National title, but also broke Mary Olsen’s 2010 meet record of 2:10.03.

Charles Vaughan of Carmel Swim Team gained himself a strong lead through the 150 but was hunted down by the field the last 50 yards. Vaughan barely held on to win in 1:58.25 over Delaware Swim Team’s Matthew Otto. Otto’s strong back half landed him silver only .02 back in 1:58.27, ahead of Jacob Montague of the Gross Point Gators who finished third in 1:58.66.

In a field loaded with top college commits for the class of 2020, future Louisville Cardinal Grace Oglesby ran away with the back half of the race to claim gold in 1:55.39 over Crown Point Swimming’s Hannah Kukurugya (1:55.64). Lauren Case of the Chattahoochee Gold, who has committed to Texas, took bronze in 1:56.12.

The top 12 swimmers achieved the Summer Juniors standard of 1:59.59.

Camden Murphy of Kingfish Aquatics claimed the final individual event tonight in a time of 1:44.31. Murphy completed his sweep of the butterfly events by taking down Nicolas Albiero of Cardinal Aquatics, who claimed the silver in 1:46.35. Aaron Schultz and Ted Schubert of NOVA took third and fourth in 1:46.58 and 1:46.94.

The top 7 fastest swimmers clipped the Summer Juniors cut of 1:48.29.

SwimMAC sprint stars Alyssa Marsh and Erika Brown led off with two quick sub-49 swims to grant their team a lead they would only extend. Christina Lappin and Jessica Merritt closed off the strong race as they shattered the previous meet record, clocking in at 3:16.62 to break the former record (also held by SwimMAC) of 3:17.93. Nashville Aquatic Club joined them under the 3:20 barrier, registering a 3:18.97 for the silver.

The Bolles Sharks cranked out to a body length lead at the halfway mark, but two exceptional closing splits from Upper Dublin’s Jake Sannem (43.58) and Michael Jensen (42.74) allowed the duo to blow past for the win. Upper Dublin clocked in at 2:57.47 to Bolles’ 2:59.00.

Thanks Theresa, we’ll look into it.

Fastest 13-year-old French boy ever is Vincent de Raucourt in 55.63.

I see that my fans have finally arrived on swimswam! I love all these downvotes. I missed them! 😆

Why so many haters? I don’t understand…

Jealousy has unfortunately created a group of haters / less educated people . what to do ?

Ok so the American record is held by Nathan Adrian at 41.08, the HOFF almost broke it with a 41.23 could this kid convert this into LCM and possible make the US squad for RIO?