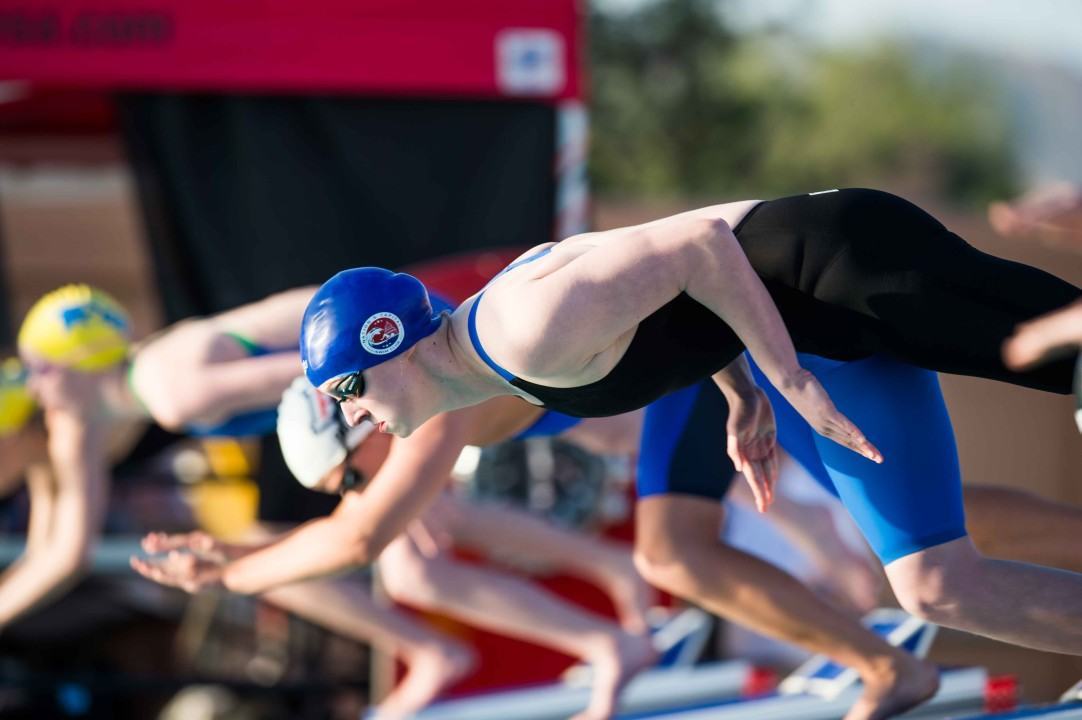 Follow along for live updates from the first night night of the 2015 Arena Pro Swims at Mesa. Archive photo via Mike Lewis/Ola Vista Photography

The first night of the 2015 Arena Pro Swim Series at Mesa features the non-Olympic distance events. The crowd will be on the edge of their seats for superstar Katie Ledecky. The 18 year-old from Nation’s Capital is coming off of altitude after spending a few weeks training in Colorado Springs. Most swimmers can attest that doing anything after a training trip is difficult, let alone racing, but if history repeats itself, we may see Ledecky lower her world record in the 1500 meter freestyle. Last summer, she broke two world records at a club meet in Texas after coming down from a training trip in Colorado Springs at altitude.

Although a World Record seems out of reach for an in-season meet in the middle of April, we have to keep in mind that Ledecky just turned 18 years old. She is not thinking about breaking world records; she is just another teenager trying to improve every time she dives in the pool. Luckily for her, a best time is conveniently also a world record.

On the men’s side, the America record holder, Michael McBroom, is the top seed in the men’s 800 freestyle by close to 15 seconds. Although he won’t be 7:43 tonight, it will be interesting to see how far under 8 he can go at this point in the season.

It wasn’t a world record, but Katie Ledecky ran away with the women’s 1500 freestyle, winning with a time of 15:42.23. She gained a lead very early in the race and continued to pull away, holding a pace that was 2-3 seconds faster per 100 than anyone else in the field. That time will stand as the fifth fastest performance in history. Her time also blew away the previous fastest time in the world this year and she is now the first woman to break 16 minutes this season.

Multiple scratches, including the top seed Michael McBroom, made some room in the men’s 800 freestyle for some fresh faces. It was a three-man race between Louisville’s Marcelo Acosta, Mission Viejo’s Nick Norman, and his teammate, Daniel O’Connor. It was close down the stretch but Marcelo Acosta managed to sneak his hand on the wall first for the win with his time of 8:10.85. The teammates from Mission Viejo finished second and third with a 8:11.14 from Norman and a 8:12.76 from O’Connor.

It’s been a while since I’ve watched Ledecky swim, but her stroke looks awfully choppy to me, more so than I remember.

That was my initial thought as well. Maybe it was the angle of the camera? Maybe she is swimming tired? Either way, a 15:42 is moving!

I stepped away during the middle 500, but when I came back around the 1100, looked like she picked up the speed, and her stroke smoothed out. Don’t know if it was just the camera angle at the beginning or if she actually did smooth her stroke out, but it looked much better on the last 400!

it looked super windy at the beginning of the race, probably the reason it looked choppy.

Having competed tonight I can tell you it was very choppy. All of us were shivering behind the blocks before the start.

Who is hiding behind the name of Swimma? ❓ 🙂

Michael McBroom must have scratched the event, as he is not listed on the heat sheets for tonight. 🙁