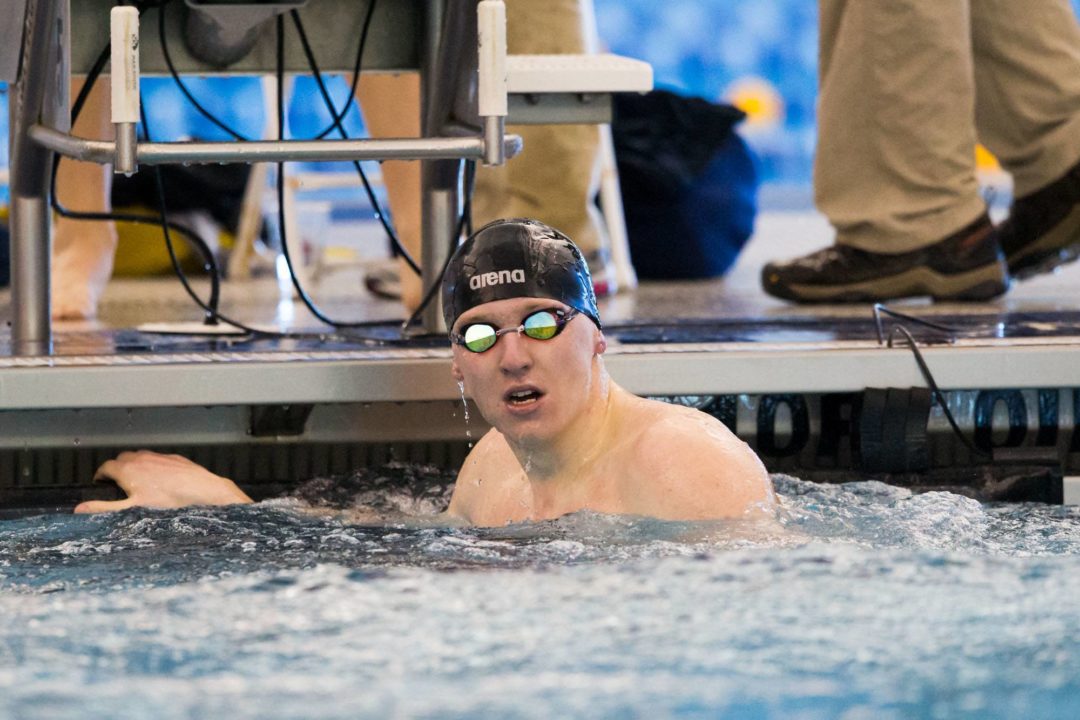 NC State's Simonas Bilis became the 3rd man in the NCAA to break 19 seconds in the 50 this season, leading off a barn-burning Wolfpack relay in 18.98. Archive photo via Tim Binning/TheSwimPictures.com

The first full day of individual racing at the men’s ACC Championships should start to give us a clearer picture of the team battle, which at this point could go any which way between NC State, defending conference champs Virginia Tech and newcomers (and 2014 AAC Champs) Louisville.

NC State had the best morning, and they hold the top seed in all three individual swimming races and should be the 200 free relay favorites tonight.

That doesn’t mean any races are already in the bag, though. UNC freshman Henry Campbell should push NC State freshman Anton Ipsen in a battle of rookies for the 500 free crown, and Louisville’s Trevor Carroll could be involved as well.

In the 200 IM, Stephen Coetzer leads for NC State, but only narrowly over Virginia Tech’s Brandon Fiala.

The 50 free saw the top 3 seeds come from the Wolfpack, with Simonas Bilis, David Williams and Ryan Held, but Georgia Tech’s top threat Andrew Kosic could make things interesting as the whole field tries to push closer to the 19-second barrier. Already, two men have cracked 19 from the SEC, and it’s looking like it might take an 18 just to finish top 4 or 5 at NCAAs.

NC State wasted no time in making a statement on day 2, winning the team’s first ACC 500 free title since 1985. That came courtesy of top-seeded Anton Ipsen, a freshman from Denmark who has been tearing up the NCAA this season.

Ipsen went 4:13.87, crushing the field by two seconds and moving to #5 in the NCAA this year. The Wolfpack are looking to overcome a big Virginia Tech diving advantage, but are getting the job done in the pool so far.

Louisville’s Trevor Carroll also stepped up in the final, dropping almost two seconds from prelims to go 4:16.03. That’s well under the NCAA invited time from last year and should give Carroll very good odds of punching his ticket to Iowa City.

UNC’s freshman Henry Campbell went 4:17.27 for third – Campbell crushed his lifetime-best by over three seconds this morning, and though he was a tick off that time at night, it’s still been an outstanding start to the meet for the Tar Heel.

Louisville had a great showing in the B final, with Marcelo Acosta winning in 4:20.76 and his teammate Matthias Lindenbauer coming in a strong second as the two took 9th and 10th overall.

Brandon Fiala finally ended the NC State streak of wins to open the meet, taking the 200 IM in a 1:43.97 touchout of two Wolfpack IMers. Fiala, a Virginia Tech sophomore, won a tight heat that saw multiple swimmers challenging for the title.

Top prelims qualifier Stephen Coetzer of NC State led at the halfway point, with his teammate Christian McCurdy just behind. But Fiala tore through the breaststroke with a 30.05 split to steal the lead from the Wolfpack duo.

At the same time, NC State sophomore Soeren Dahl was crushing his own breaststroke split (29.89) to pull up into the hunt. Dahl and Coetzer closed extremely hard (24.2 for Dahl and a blistering 23.9 for Coetzer), but it wasn’t enough to pass Fiala for the win.

Louisville’s Nolan Tesone was in the hunt the whole way too, and actually leading after breaststroke. But he fell back to 5th as the leaders charged on freestyle. Tesone was 1:44.76.

But as soon as Virginia Tech stopped the streak, NC State started another one. Junior sprint star Simonas Bilis blasted to a 19.07 win in the 50 free, improving his #4 time in the nation and putting himself into the NCAA’s current “elite” tier of sprinters going 19.0 or better. That group includes 2014 NCAA co-champions Brad Tandy (Arizona) and Kristian Gkolomeev (Alabama) and freshman sensation Caeleb Dressel (Florida).

Bilis led a 1-2 of the event along with senior David Williams, who’s been a clutch relay swimmer. Williams went 19.12 and should have a real shot to go 19.0 at the national championships as well.

Georgia Tech’s Andrew Kosic brought a 3rd-place finish for the host program, going 19.23 as the top three really powered away from the field.

Two more NC State swimmers got in the top 5, with Andreas Schiellerup (19.55) and Ryan Held (19.58). Held, a freshman, was actually two tenths faster this morning, and it’s starting to look like this NC State program could fill out a relay of three 18-second guys and a 19-low leadoff leg later on tonight.

With diving scores included (all the men’s diving happened last week during the women’s ACC meet), Virginia Tech’s lead is now just 63 over second place and 79 over third-place NC State – the H2Okies led the Wolfpack by 264 before swimming started.

All the men’s diving events took place last week, and their point are being added into the team scores as the meet goes on this week. But the 1-meter was a huge event for Miami, a program that only features divers – no swimmers – on the men’s side.

Freshman Briada Herrera won the event with a new pool record of 453.85 points. Hererra would go on to win the Diver of the Meet award on the men’s side. He was followed by teammate Samual Dorman (404.80) in a 1-2 sweep.

Virgina’s JB Kolod placed third in 372.90 points, just ahead of Virginia Tech’s Jared Butts (366.55). VT had two divers in the championship final, as did Virginia, while Louisville scored just 2 points and NC State none in the event.

The best race of the night came to close out the meet, with NC State absolutely burning down the building in the 200 free relay.

The Wolfpack blasted a 1:15.62 to win the relay, moving to #1 nationally by over half a second. That’s not far off the time that won last year’s NCAA Championships. The relay they displaced for the top ranking was Alabama’s team that featured Kristian Gkolomeev leading off in 18.6.

The time stands up at the new ACC meet and conference record, and also broke the Georgia Tech pool record belonging to an Auburn team of Bryan Lundquist, George Bovell, Cesar Cielo and Matt Targett.

The splits were outstanding for NC State. They had their own 18-second leadoff man in Simonas Bilis, who outdid his individual 50 time and cracked 19 for the first time in his career with an 18.98 leadoff split. That moves Bilis to #3 nationally in the individual event, and means the team could realistically have 4 guys split 18 seconds at the NCAA Championships.

Freshman Ryan Held came off a disappointing individual 50 to blast an 18.96 split, and Andreas Schiellerup was 19.11 before anchor David Williams crushed an 18.57 on the anchor leg. We speculated last week about a potential NC State-Alabama battle for the NCAA title, and while Cal and Texas might be hard to overcome there, the Wolfpack and Crimson Tide do have as much firepower as anyone in the nation right now.

We’ll have a more full points breakdown coming after the meet, along with some more in-depth analysis of the big happenings on night 2 in Atlanta.

State went 1:15.62 in 200 FSR for a conference record, but the big news was Bilas cracked 19 leading off for a conference record 18.98. State has made up most of the diving deficit already. The score on the ACC page has it through event 8 which counts the 1 and 3 meter diving and State leads Va Tech 495 to 459, still without the platform event which VT got 99 points in. Officially those points don’t go in until event 20 on day 3, but if they are put in, Va. Tech only has 63 of whatever the original lead was.