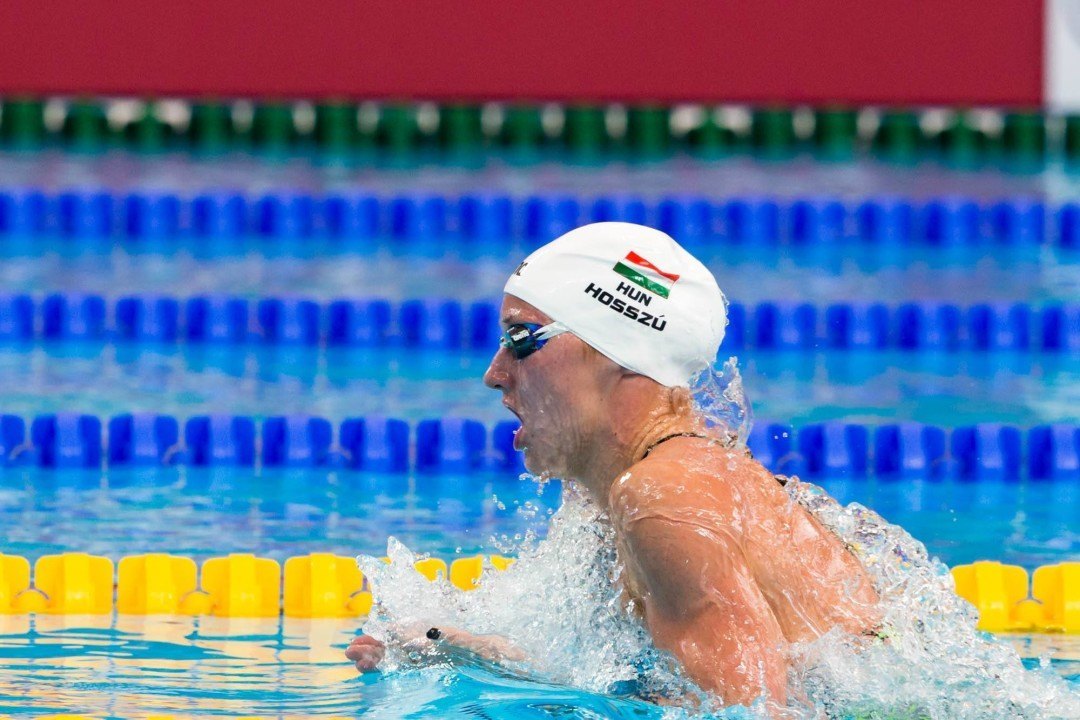 The first finals session of the FINA World Cup Series will take place today in Moscow. Hungarian star Katinka Hosszu is already back at it and will contest several events during tonight's finals. Archive photo via Tim Binning/TheSwimPictures.com

After an impressive showing at the 2015 FINA World Championships South African swimmer Chad Le Clos is back in action.

Le Clos won the first event on the 2015 FINA world cup circuit this morning, touching first in the men’s 100m freestyle in 48.16. Russian swimmer Nikita Lobinstev finished second behind him in 48.48, just out-touching fellow Russian Danila Izotov who rocked a 48.59.

The top FINA World Cup swimmer is back to her winning ways after one of her best international showings to date.

Katinka Hosszu of Hungary won her first event of the night in 1:56.83 after a tight battle with Australia’s Bronte Barratt. Hosszu led start-to-finish with Barratt right on her tail the entire race.

Barratt finished second in 1:57.15 over a full second ahead of third place finisher Melanie Margalis from the United Sates.

Cameron Van Der Burgh was under 27-seconds in the men’s 50m breaststroke again this season after a season-best of 26.62 at the FINA World Championships.

Van Der Burgh swam a 26.96 to run down Peter John Stevens who represents Slovakia yet trains at Tennessee. Stevens was a 27.46.

Finishing third was Brendan McHugh in 27.71. He narrowly beat Kirill Prigoda of Russia for a podium finish as he clocked in four one-hundredths behind in 27.75.

An American 1-2 finish highlighted the women’s 100m breaststroke which was won by recent standout Katie Meili of SwimMAC Carolina.

Meili, who most recently won gold in the 100m breaststroke at the Pan American Games in Toronto, took down a tough field with a time of 1:06.68.

Meili was the only swimmer under 1:07 this evening. Breeja Larson was second behind Meili in 1:07.19, putting some distance between herself and Vitalina Siminova of Russia who grabbed bronze in 1:07.51.

In a dead heat for gold Claire Donahue of the United States and Madeline Groves of Australia both put up a time of 58.08.

Donahue was ahead with 10-meters to go, but as they approached the wall it looked as though Groves moved past her. By getting every inch out of her touch, Donahue managed to hold on and tie Groves.

After finishing second in the 100m backstroke at worlds, Camille Lacourt of France managed a victory in Russia tonight with a 53.44 performance.

Lacourt won by a sizable margin as Grigory Tarasevich of Russia reached into the wall for second in 54.01. He just narrowly out-touched Quah Zheng Wen of Singapore who rocked a 54.03.

Josh Beaver of Australia was fourth in 54.30.

Well behind the two leaders was Daria Ustinova of Russia who rocked a 28.52 to take home the bronze medal.

That left Katinka Hosszu off the podium with a fourth place finish in 28.54.

Viktor Bromer of Denmark made a late push in the race in order to touch for gold with a time of 1:55.03. Bromer was in fourth at the 100 wall, but quickly moved up to second with 50 to go. At that point he flew by Aleksandr Kudashev of Russia in order to snag the win.

Kalisz demonstrated a similar strategy to Bromer, making his move on the back-half of the race.

Make it two for Katinka Hosszu.

The new 200m IM world record holder from Hungary grabbed her second win of the evening with a 2:10.68. That time is over four seconds slower than the 2:06.12 that she swam to win the event at worlds.

Hosszu touched first after the breaststroke leg and never looked back. Prior to that Zsuzsanna Jakobos of Hungary led the way. Jakobos ended up second in 2:12.15 to secure a 1-2 Hungarian finish in the race.

Myles Brown of south Africa led the race up until the 350-meter mark where he was passed by French swimmer Jordan Pothain.

In doing so he held off advances from fellow French swimmer Damien Joly. Joly was in third for the entire race, clocking in at 3:50.55 in order to take home his bronze.

Joris Bouchaut was the final Frenchman in the field, and he ended up fourth behind Joly in 3:51.02.

Danish sprinter Jeanette Ottesen won the women’s splash-and-dash by over half a second here in Moscow, touching in at 24.62 for the win.

Second behind her was Dar’Ya Stepanyuk of Ukraine putting up a time of 25.10. That was just good for silver was Natalie Lovtcova of Russia put the pressure on her with a 25.17 bronze medal performance.

Katinka Hosszu finished fourth for the second time tonight in a 50m-race, clocking in at 25.40 to finish just 0.23 seconds shy of a bronze medal.

Also quick was Cody Miller of the United States. Miller managed a 2:09.08 tonight ahead of fellow American Nic Fink. Fink finished less than half a second behind Miller in 2:09.51.

Miller was in first for the majority of the race but Koch split a 33.08 on the last 50 in order to get ahead of Miller and claim gold.

The top three were the only other swimmers in the field to break 2:10 in the final.

Ustinova was well ahead of Seebohm who finished 1.4 seconds behind her in 2:09.61. Ustinova led start to finish, dominating the race against all her competitors.

In Kazan just a few days ago, Govorov finished in 5th place in the men’s 50m butterfly final, clocking a time 23.18, so he was just a tad slower in this race. Phillips failed to make the final in Kazan, so a second place finish in Moscow is certain a step in the right direction.

Of course this event saw a historic swim in Kazan, where America’s Katie Ledecky charged her way to a brand new World Record time of 8:07.39, representing the first time a female swimmer has dipped beneath the 8:10 threshold.

There were two Americans slated to swim the 800m race in Moscow, however, Becca Mann was a scratch for the event, leaving an empty lane next to Hungary’s Katinka Hosszu.  The other American was Katy Campbell who wound up 7th in 8:54.95.

China’s Zhang Yuhan touched the wall first, registering a time of 8:30.60, followed by two Italians.  Diletta Carli finished in 8:32.12 for second place, while teammate Marina Caramignoli snuck into third in 8:37.03.  Something you don’t see everyday is Hosszu finishing last in a race, but she did so today, touching in 9:00.79 as the only swimmer not able to snap 9-minutes.  She may very well have been using this as a warm-down swim of sorts, given her monster schedule on the day.

Hungary’s David Verraszto snagged the top prize in the men’s 400m IM event, touching the wall in the only sub-4:15 time in the race.  Verraszto’s 4:14.89 claimed the victory, but was quite a ways off of his 4:09.90 showing in Kazan, which brought home the silver.

Italy’s Federico Turrini was less than a second behind, finishing in 4:15.10 for 2nd, followed by Russia’s Alexander Osipenko who nabbed bronze in a time of 4:16.98.

anybody have a link to live streaming of moscow world cup?

it is not on finatv in the usa