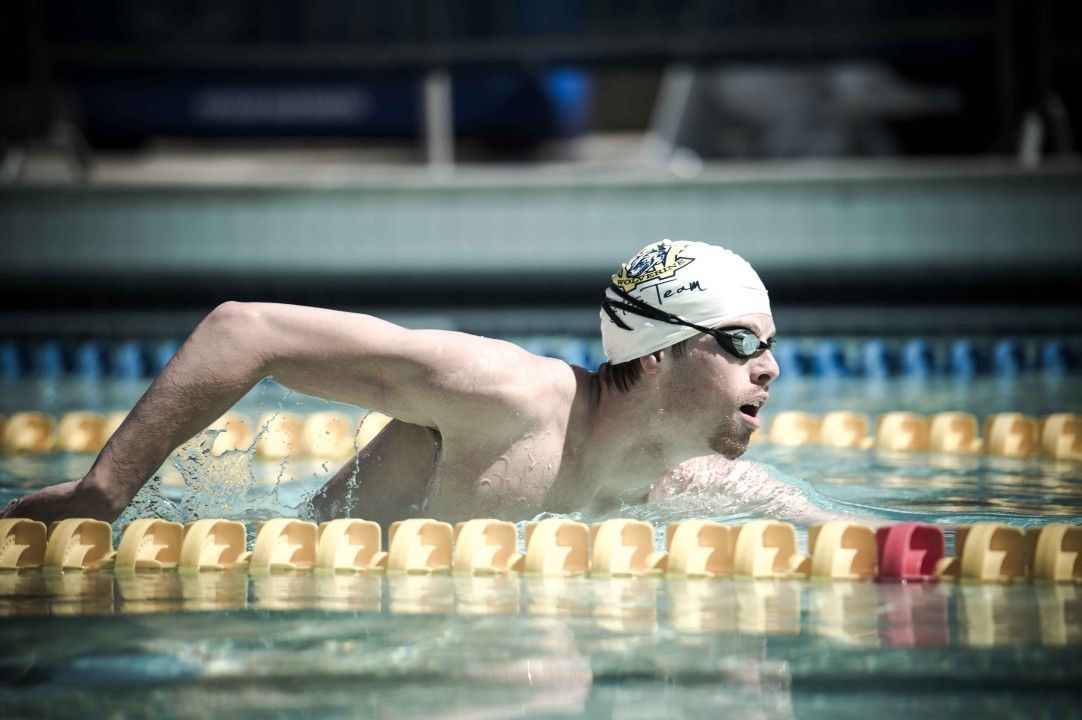 Connor Jaeger (pictured) went a season-best to win the 1500 free Sunday night, picking up his third win of the weekend and improving his third-ranked time in the world this year. Current photo via Mike Lewis/Ola Vista Photography

Danish distance star Lotte Friis dominated the women’s 800 free to open things up on day 4, leading a 1-2-3-4 sweep of swimmers from the North Baltimore Aquatic Club.

Friis, a 26-year-old member of the NBAC pro group, went 8:25.33, pulling away from a young field and showing her veteran experience. Second was 17-year-old Sierra Schmidt, well-known for her animated dancing that she does behind the blocks before each race. Schmidt was 8:28.91, a lifetime-best by nearly 6 seconds.

Fellow NBAC 17-year-old Becca Mann took home the bronze, going 8:30.02, and fourth was Cierra Runge in 8:31.55. Runge just wrapped up a stellar freshman year at Cal, but is competing for NBAC this summer.

The first non-NBAC swimmer to come in was Gator Swim Club’s Andreina Pinto, who was 8:32.94 for fourth. After her, things went back to a swimmer with North Baltimore ties, Gillian Ryan. Ryan competed for NBAC as a high schooler, but now represents Club Wolverine after her freshman year at Michigan. Ryan went 8:42.11 for sixth.

Recent Minnesota Gopher grad Kiera Janzen was 8:42.28 for seventh and the top 8 concluded with 15-year-old North Carolina Aquatics athlete Madison Homovich at 8:49.67. The top qualifier from the early heats was Olivian Anderson, a 16-year-old out of the Etobicoke Swim Club. She took 9th with an 8:52.31.

Already the world leader in the 200 IM, Hungary’s Katinka Hosszu only added to her dominance with a win in the event on night 4 of Santa Clara. Hosszu wasn’t able to crack her season-best, but her 2:09.19 is still nearly a half-second faster than any other woman in the world has been so far this year.

Cal’s Caitlin Leverenz picked up second place, going 2:11.52. Leverenz has now locked down the BMW lease prize, which goes to the top American on the Pro Swim Series. Leverenz was in a tight battle with Elizabeth Beisel for that honor, but Beisel did not swim here in Santa Clara, essentially handing the prize to Leverenz.

Dominant breaststroker Yulia Efimova was third in 2:12.91. She’ll go for the sweep of all three breaststroke races later tonight in the 50.

A couple of internationals took the next few spots: Siobhan Haughey was seventh, representing Hong Kong in 2:15.95, and Argentina’s Virginia Bardach went 2:17.29 for eighth. Rounding out that heat was high schooler and U.S. Short Course World Champs team member Katie Drabot in 2:17.79.

Michael Phelps kept up with the theme of his weekend in the 200 IM, which was taking the race out fast. Phelps, swimming just outside the top-seeded middle lane, pushed out to a huge lead at the 100-mark. Though Josh Prenot surged into the hunt over the breaststroke leg, Phelps was able to hold him off on freestyle and break two minutes, going 1:59.39.

Prenot wound up second in 2:00.43, and those two were pretty well checkout out from the bunch. Chase Kalisz took the last money-earning spot, going 2:02.33 to touch out Stanford’s Max Williamson (2:02.55) and Kalisz’s University of Georgia teammate Gunnar Bentz (2:02.60).

A slight delay kept the A finalists of the women’s 200 back sitting in the water for a brief bit, but that time just turned out to be extra rest for Katinka Hosszu. The Hungarian was coming off of the 200 IM final less than a half-hour prior, and turned the tight double into a pair of wins.

Hosszu has done this kind of thing across the entire Pro Swim Series (a big reason why she’s the runaway point winner), so it’s only fitting she’ll end the 2014-2015 circuit with a two-win double. She pushed out to a big lead early and cruised in for a win in 2:07.93

Stanford’s Maya DiRado made things interesting, though, really pushing Hosszu over the last 50 meters or so and winding up with a top-10 time in the world this year at 2:08.50.

Olympic champ Missy Franklin, in her first major competition since NCAAs in March, was 2:09.84 for third. Franklin will have her work cut out for her to get those times down by World Champs in August, but it’s generally been a bad idea to bet against the bubbly speedster.

For the second consecutive day, Cal Bear Ryan Murphy beat a murderer’s row of backstroking threats by a wide margin. Last night was the 100, tonight the 200, where the rising junior went 1:57.06. That’s just about a tenth off his season-best, which currently sits 9th in the world.

Olympic gold medalist Tyler Clary was second, putting up a 1:59.32, and the only other guy under two minutes was Jacob Pebley, Murphy’s college teammate, at 1:59.82.

Colombian Olympian Omar Pinzon was originally fourth, but took a DQ, moving Tristan Sanders of Club Wolverine up into that spot. Sanders was 2:01.60, just ahead of Olympic gold medalist in the 100 Matt Grevers at 2:01.89.

Coming off the 200 IM earlier in the night, Russia’s Yulia Efimova completed her 3-for-3 sweep of the breaststroke events in Santa Clara with a win in the 50. Efimova was 30.37, threatening the 30-second barrier and improving her #2-ranked time in the world by two tenths.

Brazil’s Felipe Lima rolled to a title in the men’s 50 breast, going 27.65 to beat the field by a sizable margin. The Fiat swimmer was a half-second up on Trojan’s New Zealander Glenn Snyders (28.11) and Cal’s Chuck Katis (28.32).

New York Athletic Club pro Mike Alexandrov, a training partner with Snyders at Trojan, was fourth in 28.35, just behind Katis in the results.

Mexico’s Jorge Murillo Valdes went 28.56 for fifth. Behind him, Club Wolverine’s Zach Hayden dueled Indie Swimming’s Michael Andrew, with Hayden winning 28.86 to 28.89. Louisville’s Thomas Dahlia was 28.92 and the final A heat spot went to another Trojan, Azad Al-Barazi in 29.12.

A loaded women’s 100 free didn’t really provide the tight showdown it was billed as, but that was mostly because of how fantastic the winning time was. Current world leader Femke Heemskerk of the Netherlands was all but untouchable, blasting to a 53.64 that beat everyone by more than half a second.

Young American Simone Manuel was second back at 54.29, which is still a pretty solid swim for her. It’s just hundredths off her season-best and she still ranks as the second-best American of the year behind Natalie Coughlin.

The B final went to California Bear and Egyptian national Farida Osman in 55.66.

With top seed Nathan Adrian bowing out after prelims, the men’s 100 free was wide open for USC’s Vlad Morozov. The Russian national was 49.28, just about a tenth under what Adrian went this morning.

Just .02 out of the money-earning spots was Alexander Sukhorukov of Trojan at 49.62, and just a hundredth behind him was Joao de Lucca of Brazil in 49.63.

Fellow Brazilian Marcelo Chierighini pushed the pace early and was 49.74 for sixth, and USC’s Dylan Carter was less than a tenth back at 49.81.

Hong Kong/Club Wolverine sprinter Geoff Cheah knocked down the 50-second barrier by the narrowest of margins at 49.99, and his Club Wolverine teammate Anders Nielsen was 50.49 to round out the heat. Stanford’s David Nolan won the B final in 50.09.

Connor Jaeger battled Tunisian Olympian Ous Mellouli in the early goings, and Michael McBroom made things interesting through the middle of the race, but Jaeger pushed the pace and dropped both swimmers as the laps wore on, eventually picking up the win in 14:56.43, a season-best by almost two seconds. That improves Jaeger’s third-ranked time in the world this year.

It’s been an interesting weekend for Jaeger, who won the 200 free and 1500 free, but dropped the middle distanced 400 and 800 to McBroom. Still Jaeger should cement his third-place finish in the overall series points.

Argentina took home the women’s medley relay title in 4:12.72. Macarena Ceballos was a pretty solid 1:10.52 on the breaststroke leg, and Virginia Bardach ended a busy weekend with a 1:01.78 fly split. Andrea Berrino was the backstroker with Aixa Triay closing out the foursome.

Argentina made it a sweep by winning the men’s relay, too. Federico Grabich had the field’s best backstroke split at 56.21 to stake the team to a big lead and set a trend – the other three swimmers were also the field’s fastest in their strokes. Rodrigo Frutos was 1:03.86 on breast, Santiago Grassi 53.89 on fly and Matias Aguilera closed in 51.48 on free to help Argentina go 3:45.44.

Brazil’s Fiat club took third in 3:50.44, getting a 57.67 leadoff split from Rodrigo Correia on backstroke.

Phelps and Adrian out of 100 free.

You just pointed out a fact… why so many downvotes??

I downvoted him too. Centuries ago Kings often gave a harsh punishments to those who brought bad news.

But Anonymous, you shouldn’t judge others when you don’t know what is in their minds or hearts – or maybe you do. Or you think yourself to be a king from centuries ago?

I’m guessing most of the down votes were like mine, nothing against SeanSwimmer at all, we’re just pissed at Adrian (and maybe slightly at Phelps) for scratching.

Missy Franklin is now in the A final of the 100 free.

Correct me if I’m wrong, but I don’t believe Phelps has actually won a 200 IM since London…