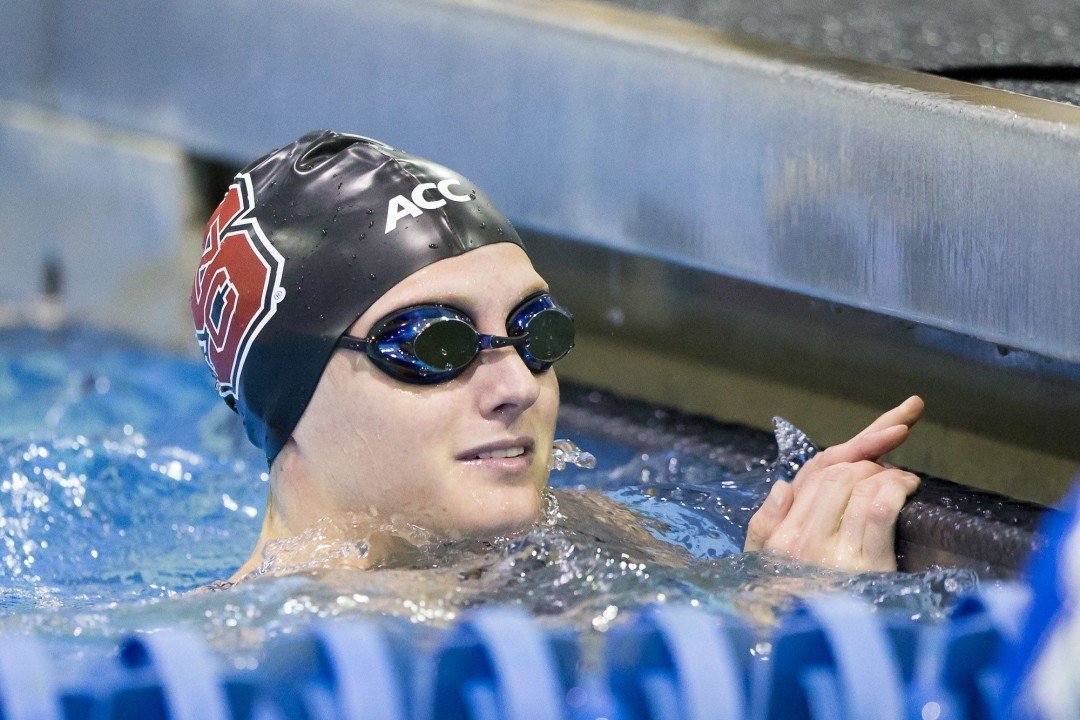 Riki Bonnema won the 50 free and helped NC State break the ACC record in the 200 free relay on day 2 of the ACC Championships. Current photo via Tim Binning/TheSwimPictures.com

After an opening night of relays, the women’s ACC Championships gets into individual scoring events tonight, kicked off by the 500 free, 200 IM and 50 free.

Riki Bonnema of NC State was the story this morning, blowing past the ACC record in the 50 free with a 21.87. She and the rest of the NC State sprint freestyle machine will take on a tough field that includes Louisville’s explosive junior butterflyer Kelsi Worrell and Virginia speedster Ellen Thomas.

Speaking of Virginia, the defending conference champs have the 500 free loaded up with four swimmers in the A final, including defending champ and national leader Leah Smith. Watch for the Cavs to jump to an early lead, a lead they have the potential to run away with over the course of the night.

Then there’s the 200 IM, where Notre Dame’s stud Emma Reaney was the top qualifier. The American record-holding breaststroker will have to overcome Virginia’s elite backstroker Courtney Bartholomew as well as new Louisville addition Tanja Kylliainen to defend her ACC title.

Also competing tonight will be the 1-meter diving event, along with the 200 free relay.

Our full prelims recap is here, and our midday Ups/Mids/Downs analysis is here.

Keep refreshing this page for event-by-event updates from Atlanta, and don’t forget to follow our live twitter account, @SwimSwamLive, for the most up-to-date results from tonight’s ACC, SEC and Big Ten action.

Virginia’s Leah Smith jumped out to a lead from the get-go and never looked back, blasting a 4:35.67 for her second-consecutive ACC title in the event. That’s just a bit slower than Smith went in setting the conference record a year ago, but considering she was 4:32 back in December, it’s safe to assume she’s saving a full rest for the NCAA Championships.

Virginia loaded up this heat and will earn monster points from it. In addition to Smith’s win, freshman CeCe Williams was third (4:43.09), junior Hannah Borgeson fifth (4:43.52) and senior Alison Haulsee eighth (4:50.40) in the A final.

That one event netted the Cavs 119 points, and vaults them from 4th to 1st in the standings. They now lead UNC by 41.

North Carolina took fourth with Emma Nunn, who went 4:43.14, and also in the A final were Pitt’s Kaleigh Ritter (4:44.37) and Louisville’s Andrea Kneppers (4:45.70), who was just a tick off the school record she set last week at Louisville’s first-chance meet.

The B final went to NC State’s Rachel Muller in 4:43.21, a narrow touchout of Virginia Tech’s Jessica Hespeler. That’s a lifetime-best by about two seconds for Muller, a great sign for an NC State team that is starting to complement its strong sprinters with a great distance program.

New to the ACC this year, Louisville got its first ACC champion in any sport in school history with Tanja Kylliainen‘s big 1:55.72 win of the 200 IM. In an intense battle late, Kylliainen used an outstanding underwater off the final wall to beat defending ACC champ Emma Reaney for the title.

That time betters Kylliainen’s Louisville school record that she set at the same “first chance meet” as Kneppers.

Reaney actually wound up DQing in the race. That bumped Virginia’s trio of Kaitlyn Jones (1:56.38), Courtney Bartholomew (1:56.53) and Ellen Williamson (1:57.42) up to second, third and fourth, respectively. All three of those times were a bit off each woman’s season-best, suggesting that most of the Cavalier studs are saving a full rest for the national championships. That means fans hoping to see Bartholomew break the American 100 back record later this meet will probably have to wait a few weeks longer.

NC State’s Alexia Zevnik was fifth in 1:58.01, and her teammate Addisynn Burch took seventh at 1:59.01. Between them was Louisville’s other entrant, Erica Belcher (1:58.59). Louisville and NC State appear to be two key players in the battle for second place as a team, along with UNC.

It was that same NC State-Louisville battle at the top of the 50 free, with NC State coming out on top this time. New conference record-holder Riki Bonnema went 21.97 for the win, a bit off her prelims time, but still well under the rest of the field for the event title.

Louisville’s Kelsi Worrell was the closest challenger, going 22.12 – that’s a tenth slower than she was at conference last season. While that’s not ideal for Louisville, Worrell has been lights-out in the butterfly all year, and it’s looking more and more like that’s where the senior is placing the brunt of her focus.

Virginia sophomore Ellen Thomas was seventh in 22.46, with NC State’s Lauren Poli rounding out the A final in 22.68.

Heading into the diving break, Virginia continues to lead handily with 417 points. UNC used a well-rounded 50 free attack to improve to 372 points, 64 up on Louisville (308) and a bit more on NC State (293).

Florida State picked up the 1-meter diving win with senior Katrina Young, upsetting last year’s champion Kaylea Arnett of Virginia Tech. Young scored 337.60 points, coming within 30 of the meet record, and topping the next wave of divers by four.

NC State will get a boost in team points after Rachel Mumma took fourth – she’s the highest non-senior finisher with 313.40 points. Yet another senior followed her in Miami’s Cheyenne Cousineau (313.05).

The top of the points remains stable with Virginia and UNC, but Louisville and NC State have now moved into a tie for 3rd, with a big 200 free relay showdown upcoming to determine who will take the spot heading into day 3.

The North Carolina State Wolfpack is quickly becoming known for its relay prowess in the post-season, and adding to that reputation tonight, NC State broke the ACC record in the 200 free relay with a 1:28.18.

That breaks the 1:28.71 the team set last year with nearly the same lineup. Swapping freshman Krista Duffield for last year’s freshman Natalie Labonge, the Wolfpack move to #5 nationally. ACC 50 free record-holder Riki Bonnema was the key piece, splitting 21.47 on the anchor leg. Duffield was 22.02 for the next-best split. Also on the relay were Lauren Poli (22.46 leadoff) and Ashlyn Koletic (22.23).

They topped their North Carolina rivals UNC by well over a second. The Tar Heels were 1:29.40, getting a 22.04 split from Hannah Lincoln.

Virginia finished just a tenth back of UNC, going 1:28.52 on a 21.87 split from sophomore Ellen Thomas. That’s just .02 under what Virginia went at their mid-season rest meet.

The battle for fourth was tight, with FSU just touching out Louisville 1:29.96 to 1:29.98. The Seminoles were led by a 22.60 leadoff split from Kaitlyn Dressel, while Louisville was a little quicker on the leadoff with Kelsi Worrell‘s 22.28, but a bit less consistent the rest of the way.

That wraps up day 2 with Virginia still leading, though their margin has dropped considerably. UVA sits at 486, but the North Carolina Tar Heels have moved to within 30 points, holding steady at 458. In a meet that scores down to 24th place, 30 points is basically a single relay DQ, meaning Virginia will have to stay on its toes moving forward.

NC State’s sprint heroics move them into sole possession of third place at 383, with Louisville (369) and Virginia Tech (342) trailing them.

We’ll have a full scoring breakdown coming shortly, as well as our nightly “6 Big Things” post to analyze the major developments a bit further.

does anyone know if real-time results are working somewhere? the ACC page isn’t updating. Thanks, SwimSwam for keeping as close to real time as possible!

SwimFan – the ACC live results page is giving us as much trouble as it’s giving you. For now, Meet Mobile and our @SwimSwamLive twitter account are probably the two most live options.

This is a annual problem with Georgia Tech. Known for engineering, cannot seem to run live results. Anybody know someone we can contact to help with this issue?! This is the ACC Championships. Not a summer league meet.

The link on this article seems to be wrong. Live results working on this site.