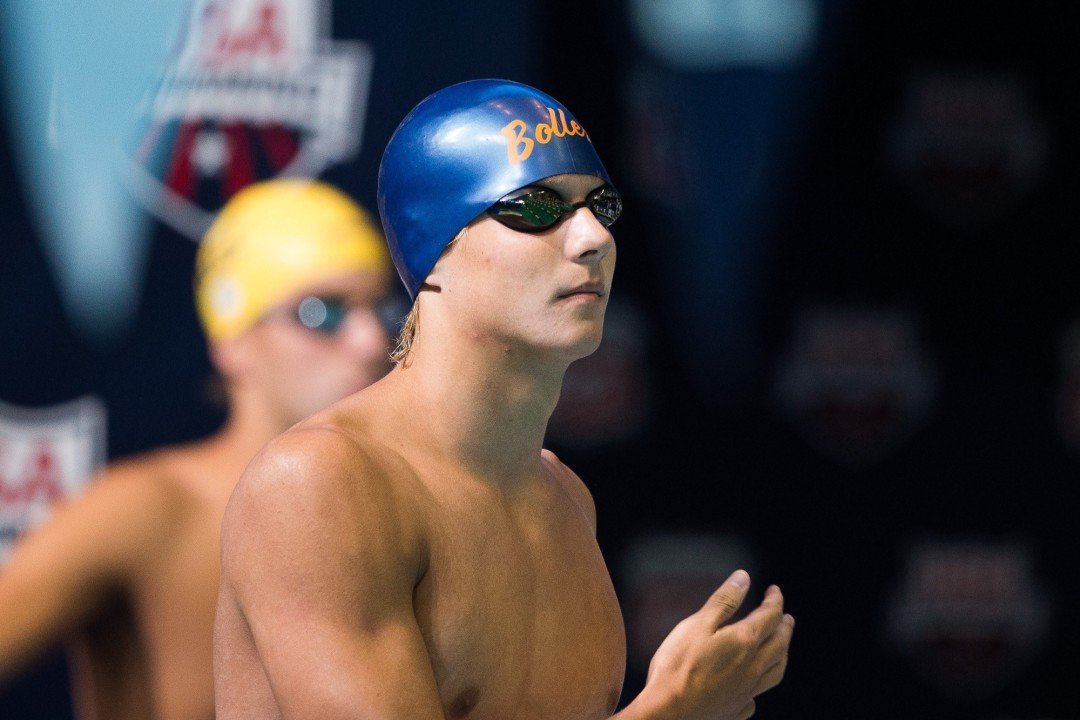 Caeleb Dressel is one of a handful of swimmers who has arrived at Junior Nationals and will make cameo appearances on Sunday. Archive photo via Tim Binning/TheSwimPictures.com

All The Links You Need to Follow the Final Day of the 2014 U.S. Junior National Championships in Irvine, California

There are quite a few significant, high-seeded scratches on Sunday. Ella Eastin and Sonia Wang are both out of the girls’ 200 IM. Corey Okubo already told us that he was done with the meet, so he’s out of the 200 IM (no surprise there). Leah Stevens and Brooke Lorentzen, both top four seeds, are skipping the girls’ 1500 free.

In the men’s 800 free, Chris Wieser and Ryan Kao are both scratches – meaning Wieser’s meet is done individually. Kao is still entered in the 200 IM on Sunday.

And in the 50 frees, Cam Jones is out of the men’s race (he’s scratched a lot this week), while Linnea Mack is missing the girls’ 50 – which was her only entry at Juniors to begin with.

Normally at the end of a long meet like this, the final day has a weird vibe. Most of the big story lines have been played out, there’s still some titles to be awarded, but we have a pretty good feel for where everyone sits at this point.

But not here at Junior Nationals. Athletes who bypassed this meet to focus exclusively on senior Nationals in the same pool next week have arrived for a warm-up test in the 50 free, which should inject some new enthusiasm into the pool deck.

In the men’s race, that’s Caeleb Dressel, who will be the top seed. Dressel didn’t race for the first 6 months of the year, before picking things back up with the long course season. He has come up to speed in a hurry, however. A summer that began with a 24.7 in the 50 free in early June became a 24.2 by late June and a 22.6 by the Bulldog Grand Slam meet three weeks ago. Now he’ll try to get closer to his 22.22 lifetime best and take one last test before Nationals begin next week.

He’s the only swimmer seeded under 23 seconds in that race, but likely not the only swimmer who will go under 23. Michael Andrew is the 2nd seed in 23.08, Justin Lynch is 3rd in 23.30, and Blake Pieroni is lurking. Pieroni has had some spectacular relay swims this week, but this 50 will be his first individual swim – he’s an Indiana commit and was Dressel’s World Junior Championships teammate in 2013.

In the girls’ 50 free, NCAP’s Janet Hu arrives with the 2nd seed in 25.53. As she’s trying to warm up, the top seeded Amy Bilquist, already winner of the 100 free in a lifetime best, will be comfortably settled in. Nora McCullagh from SwimMAC, the 3rd seed, is also a new face on Sunday – and she’s entered to swim both the 50 free and the 200 IM.

Wow, thanks for all that info!