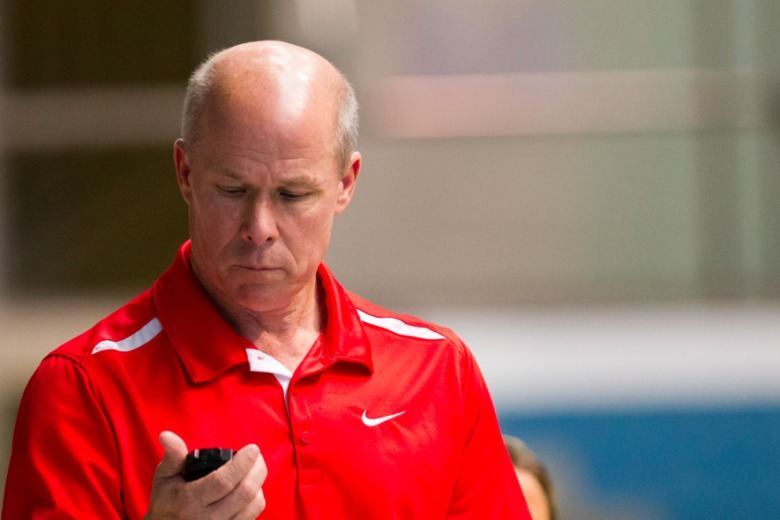 Georgia men's coach was on deck for warmups at the 2014 SEC Championships. Archive photo via Tim Binning/TheSwimPictures.com 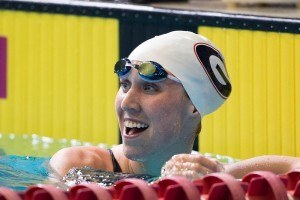 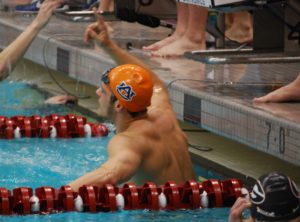 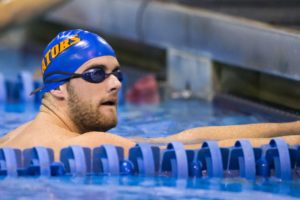 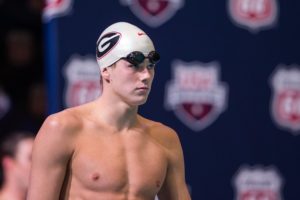 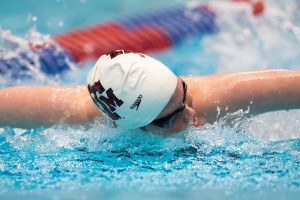 A couple of notes from night 1 of the 2014 SEC Swimming & Diving Championships in Athens, Georgia.

Bauerle Allowed On Deck for Warmups at SEC’s

Jack Bauerle is back with his team, sort of. Several sources have told us that while Bauerle is still officially suspended, he has been given some small reprieves for this SEC Championship meet. He’s allowed to stay with the team in the team hotel, and he is allowed to coach them through warm-ups.

As soon as racing starts, however, Bauerle is allowed to be in the building, but not on deck, according to our on-the-deck reporter Shanda Crowe, and as soon as the racing starts, Bauerle has been ducking into his office (remember that the Bulldogs are the home team) and watching the races on the live stream. He is, however, allowed to be in the stands, we’ve been told, but chose his office on Tuesday.

Meanwhile, the Missouri men have taken a huge blow, as they’re without sophomore Max Grodecki at this meet. He’s n0t entered at all (and wasn’t when the pre-cut psych sheets came out last week), and according to a team spokesperson is “suspended indefinitely for a violation of team policy.”

Coming into the SEC Championships, Grodecki ranked 13th in the country with a 43.19 in the 100 yard freestyle. That time will be right on the bubble for an NCAA invite, if he’s reinstated with the team by that point.

This is a huge blow for a Missouri team that has looked spectacular all season. Grodecki broke the school record earlier this year by four-tenths of a second with that aforementioned 43.19.

Until this point of the season, Missouri had been using Grodecki as both the freestyler and the backstroker on their 200 medley relay. Even without him, though, they put Sam Tierney, a breaststroker, on the backstroke leg, and freshman Michael Chadwick on the anchor leg. The Tigers only finished 7th in that race, but they did swim a season best and an NCAA Automatic Qualifying Time.

The Auburn men are leading, but their day 1 margin is roughly the same as it was after day 1 last year when Florida won the title. The Tigers gave away some points in the 200 medley, but could have been even further in front. Meanwhile, the Texas A&M Aggies, behind their first ever SEC title from Ford McLiney, are in 2nd, as compared to 6th after the first day last year. They are unlikely to hold that spot as individual swimming events way heavier into the scoring, but this is still a great start for the A&M men.

On the women’s side, Georgia already looks like they might be running away with the title. While a 34-point margin over 2nd-place Tennessee isn’t all that big when three finals are scored,  they were 34 points behind Tennessee after the first day last year.

The difference is the 200 medley, which was 7th last year and won their first SEC title since 2006 in the event this year. Their 800 free relay is probably just barely not as good as they were last year, but they’re still probably the best in the country. Georgia’s stroke group is swimming insanely well this year.

School Records are falling like crazy. Georgia set 5 school records in 6 events, with the exception being that 800 free relay. Their men’s medley time of 1:26.87 was two seconds better than their old school record.

The A&M women broke the SEC Record in the 800 free relay by seven-tenths of a second with a runner-up finish; Paul-Marc Schweitzer led off the men’s 800 free relay with a school record 1:34.39, and that overall relay was a record in 6:21.20.

The Florida men broke school records in the 200 medley and 800 free relays, the latter of which was an SEC Record and faster than they were to win NCAA’s last year.

In sum: every school at this meet broke at least one school record, by our math, except for Tennessee. That’s impressive given that there were only two races, and an indicator of just how fast this meet was.

No Werner? No Problem

Doing their best Carmel High School impression, Florida left arguably their best 200 freestyler, Pawel Werner the defending SEC Champion in the event, on the bench for the 800 free relay, and still won going away in a new school and SEC Record. That’s the impressive depth that makes the Gators NCAA title contenders this year.

Cieslak was on the 800 free relay…

Sorry, should have read Werner. Refresh, and it will be corrected.

Another one: through just two swim events, NINE of the ten SEC men’s teams have an NCAA qualifier…

… individually, Hornikel, Koski, Schweitzer, and Main are almost definitely in. Disney-May should be in, Rairden possibly.

Was the Tennessee Men’s 800FR not a school record?