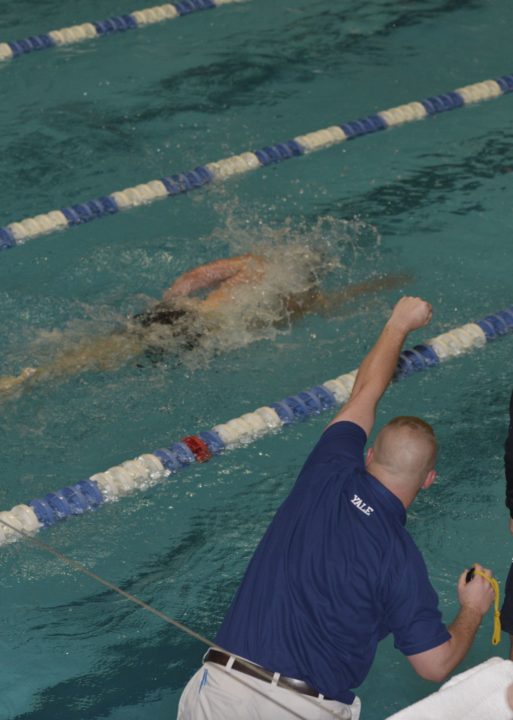 Brian Hogan of Yale set a new meet and pool record in the 1000 free at the 2014 Ivy League Championships in Cambridge. Archive photo via Yale Athletics

Princeton’s Michael Strand took the backstroke out in 21.73, the only sub-22 leadoff in the field; Dartmouth’s James Verhagen was .3 behind. The fastest breast in the relay belonged to Penn’s Kyle Yu, which allowed the Quakers to pass Cornell, Dartmouth and Harvard at the breast/fly exchange. Marco Bove of Princeton split a 24.96 breast and the Tigers were able to maintain their lead. Penn inched up on Princeton in the fly, with Rhoads Worster splitting 20.91 to Princeton’s 21.14 from Connor Maher. Despite a 18.99 anchor from Harvard’s Griffin Schumacher, Princeton finished first, Penn second, and the Crimson third. Harrison Wagner brought it home for the Tigers in 19.33 and their combined 1:27.16 broke the Blodgett Pool record (previously 1:27.88 by Harvard from 2008) by .72.

As the 1000 got underway in finals, the fastest times from the afternoon session belonged to Harry Stephenson of Columbia (9:12.12) and Cory Mayfield of Brown (9:12.15). Yale’s Brian Hogan set the pace from the beginning, with Penn’s Chris Swanson matching him stroke for stroke. Hogan’s teammate Ben Lerude was about a body length behind the leaders until about the 400 when they really started to open it up. Hogan led but Swanson stuck to his shoulder, never letting him get too far ahead. Princeton’s Zach Ridout caught up to third-place Lerude by the 600 and took over at the 650. Harvard’s Mike Gaudiani, who had been turning with Ridout at just about every wall until the 600, fell off a bit as Ridout started descending. Meanwhile it was a two-man race in the middle of the pool with Swanson trying to run down Hogan. Swanson came home in a 50.53 but it wasn’t enough to catch Hogan, who won in a pool and meet record time of 8:52.88. Swanson was second in 8:53.02, which was also under the previous records. Ridout finished third (9:05.75), followed by Lerude (9:07.44) and Gaudiani (9:08.40). Harvard’s Steven Kekacs was sixth (9:11.43), while Stephenson and Mayfield rounded out the top eight.

Kevin Quinn of Columbia took the 400 IM out first with a 51.74 fly, while Princeton’s Teo D’Alessandro and Harvard’s Christian Yeager weren’t far behind. Yale’s Kevin Stang pulled even with Yeager after the back and the two were leading the field going into the breast. Princeton freshman Sam Smiddy and his teammates D’Alessandro and Daniel Hasler all made their moves in the breast. And then Smiddy just exploded into the final 100, extending his lead and eventually winning in a pool record time of 3:47.33. Quinn finished second (3:49.02) while Stang was third (3:50.22).

The outcome of the 100 fly was determined by the back half. Columbia’s David Jakl flew off the start and was the first to turn at 21.56, the only one under 22 in the heat. Defending Ivy champion Tommy Glenn of Brown came back a full second faster than Jakl and won in a new Blodgett Pool record time of 46.13. Jakl finished second in 46.48, and Penn’s Worster took third with 47.05.

Dartmouth senior Nejc Zupan lowered the Blodgett Pool record of 53.56 he had set in prelims by .04 en route to winning his seventh Ivy championship. Zupan led wire-to-wire over Harvard’s Eric Ronda, who was second in 53.88. Byron Sanborn of Princeton was third (54.19).

The much-anticipated showdown between Princeton’s Michael Strand and James Verhagen of Dartmouth in the 100 back looked close, but Strand controlled the race from beginning to end. His 46.80 finish lowered the pool record he had set in the morning by a half-second. Verhagen took second in 47.20. Cornell freshman Dylan Sali was third (47.61).