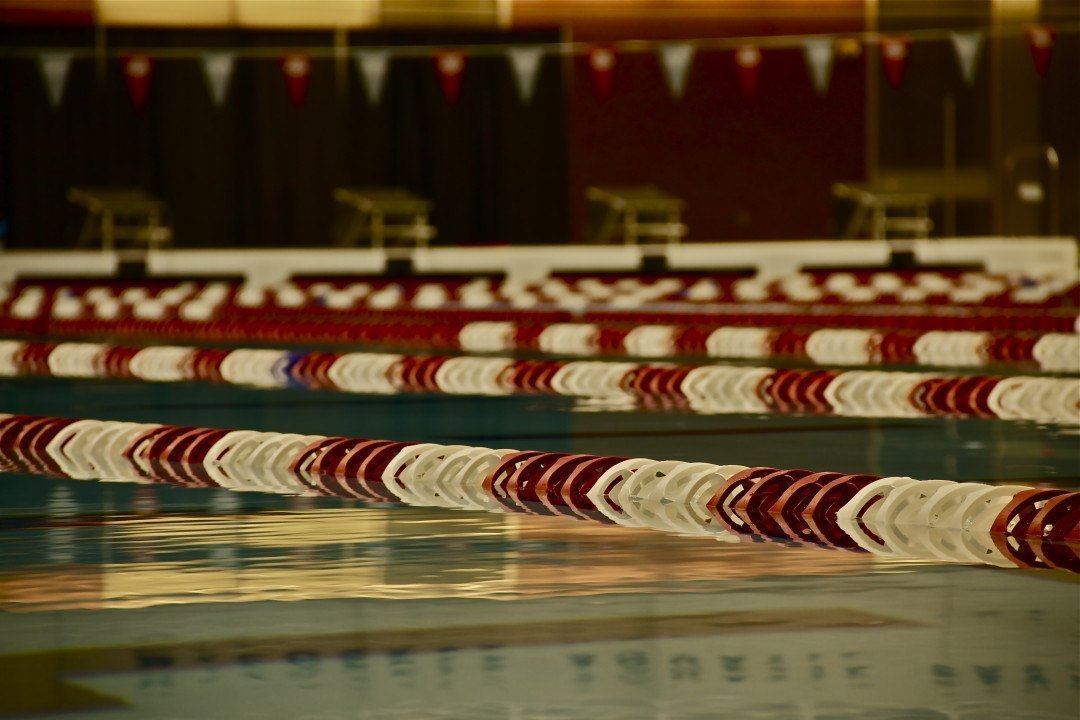 State champions seem to be a part of the Stuart DNA as the Stuart brothers rake in five to lead Regis to its fourth straight team title. Current photo via Gold Medal Media

The seniors of Regis Jesuit don’t know what it’s like to lose.  The Raiders secured their fourth straight team title behind two relay wins and four individual state titles.  Hennessey Stuart was the star of the show, winning four state titles today to close out his impressive high school career.  Winning seems to be in the Stuart’s DNA as little brother Quinlan added to the trophy cabinet with his win in the 100 breast.  A full finals recap is below.

The Raiders of Regis Jesuit got off to hot a start, grabbing a victory in the 200 medley relay by almost three seconds.  Led off by Hennessey Stuart on the backstroke leg (22.17) it was his little brother, Quinlan, who put up the fastest split in the pool for breaststroke with a 25.44.  Christopher Morales followed with a 23.02 on the fly while William Pieseski anchored it home with a 21.08.  The squad touched first in a time of 1:31.71 ahead of Boulder (1:34.34) and Fort Collins (1:35.65).

Senior standout of Thunder Ridge, Nathan Mueller, finally achieved his dream of being a state champion.  Not only did Mueller garner the state champ title but he did it in record setting fashion.  Shaving just .06 off the old 5A state record, the soon to be Wisconsin Badger touched the wall in a 1:38.26.  Grabbing the silver and bronze were two Regis Raiders.  Austin Phillips finished right ahead of teammate Chris Dawson with times of 1:39.25 and 1:39.98, respectively.

Hennessey Stuart, who is on his way to NC State in the fall, found himself in a race tonight even though the prelim session was a walk in the park.  Cherry Creek’s Jake Markham, a soon to be LSU Tiger, gave Stuart a run for his money but couldn’t hold on at the end.  Stuart got to the wall first in a time of 1:47.77 while Markham was just behind him in 1:48.58.  Ryan Ball grabbed third in a 1:50.58.

Senior JP Beach grabbed a title to cap off his final 50 free high school swim.  Beach touched in at a 20.32.  The race for second was won by a fingernail; Miles MacKenzie just touched out Hunter Bains with a 20.63 compared to a 20.64.

Kyle Goodwin out of Regis (which is huge for the team point total) crushed the field with a point total of 559.25.  Trent Kindvall was behind him with a score of 487.65 while Anthony Belitz was third in a score of 484.65.

The top three finishers from the 50 free showed up again in the 100 but in a different order.  Miles MacKenzie capped off his senior high school career with a state title, touching first in a 45.25.  Hunter Bains was right behind him for second in a 45.41 while JP Beach touched for third in a 45.59.

Mueller added to his hardware collection in the 500 with another state title.  While he cruised his way to the top seed last night, Chris Dawson out of Regis gave him a run for his money.  Mueller got his hand to the wall first in a time of 4:27.41 while Dawson grabbed a handful of team points for Regis with his second place finish which was secured with a time of 4:28.87.  Aaron Sett was a distant third with a time of 4:33.91.

Cherry Creek was able to steal a win away from the Raiders in the second to last relay of the day.  The squad of Eric Fuqua, Kyle Colley, Hunter Fuqua, and Jake Markham got to the wall first in a time of 1:24.13.  Fairview grabbed silver with a 1:24.60 while Regis faded to third in a time of 1:25.30.

Stuart hit the water again in the 100 back, and it’s no surprise he got himself another state title, making it three on the day.  He was a little slower than last night, touching in a 47.24, but the win was most important.  Thomas Konde was a distant second in a 51.10 while Maxwell Holter was right behind him with a 51.25.

It seems as though state champions run in the family and the Stuarts sure have a reason to celebrate tonight.  Quinlan Stuart held on for the win in the 100 breast in a time of 57.20. He was challenged by Joshua Bedford who touched second with a 57.53. Theodore Koerner, who scored more points for Regis, swam to third in a time of 58.67.

The team state championship already belonged to the Regis Raiders at this point, but they added an exclamation point at the end with their new 5A and Colorado state record in the 400 free relay with a time of 3:00.84, erasing the old record by four seconds.  The team of Hennessey Stuart, Mitchell Bruckman, Christopher Dawson, and Austin Phillips swam into the record books and won Regis its fourth consecutive team title.  Cherry Creek was far behind for second with a 3:04.14 while Fairview was third in a 3:07.69.

Christine thank you so much!! What a great job all the CO swimmers did!