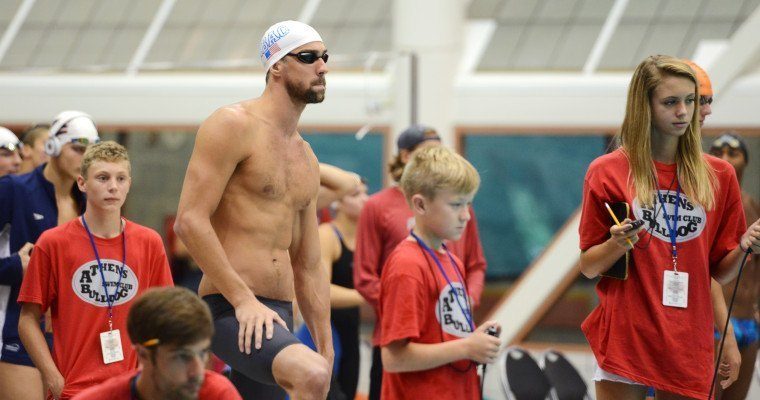 Michael Phelps and Ryan Lochte will meet in the men's 100 backstroke, with Tyler Clary and Nick Thoman also among the A finalists. Archive photo via Shanda Crowe/shandacrowe.weebly.com

Perhaps the marquee matchup of the weekend will happen Saturday night, with Michael Phelps and Ryan Lochte going head-to-head in the 100 backstroke. Both are testing the waters in the race while presumably mulling over event lineups for nationals, and hold the top two seeds going into tonight.

Other big races should include some tightly-bunched 50 free fields led by Arianna Vanderpool-Wallace and Cullen Jones, plus Tyler Clary vs Chase Kalisz and Cammile Adams vs Hali Flickinger in the men’s and women’s 200 flys.

Stay tuned and keep refreshing this page for live recaps of the finals session.

Texas A&M grad Cammile Adams won the 200 fly to open things up. Competing for SwimMAC, Adams went a season-best 2:08.45, just a tenth faster than her time from the Mare Nostrum series earlier this summer.

Adams won by about a second over Georgia’s Hali Flickinger, who finished at 2:09.48. Those two were pretty well checked out from the field, with third-place Lauren Harrington coming in at 2:10.15.

The touted matchup between NCAA champ Chase Kalisz and Olympic gold medalist Tyler Clary turned out to be a great one, with Kalisz coming from behind to take the win in 1:58.09. Clary led by two tenths at the 100-mark, but the Georgia Bulldog ran him down over the back-half. Clary still held on for second in 1:58.96, topping Conor Dwyer‘s 2:00.55.

Things looked close coming out of prelims, but Bahamian Olympian Arianna Vanderpool-Wallace turned the race lopsided in the final, going 24.67 to win by almost eight tenths.

Things got close after that, though, with Vanderpool-Wallace’s teammate Madison Kennedy and SwimAtlanta’s Amanda Weir tying for second place at 25.44. Just .04 back was Georgia’s Maddie Locus, and Katie Meili of SwimMAC took fifth in 25.56.

Second coming out of prelims, Bruno Fratus took over the final of the men’s splash and dash, going 22.09 to top American Olympian Cullen Jones. Fratus, a Brazilian who trains with Lara Jackson at Auburn, still holds the world’s second-ranked time in the 50 this year. He was well off that time (a 21.45), but still beat Jones with ease. Jones finished at 22.35.

Texas and SwimAtlanta sprinter Caleb Weir went 22.64 in tying for third with Bolles High School star Caeleb Dressel. That’s an outstanding swim for Dressel, relative to his previous times this season. After a lengthy break from competition, the Florida signee has dropped time in droves this weekend, which should clear up some doubts about his readiness for this summer’s nationals.

SwimMAC’s Kathleen Baker went 1:00.65 to pick up the 100 back win. One of the top high school prospects in the country, Baker has had a great meet so far, and this race was just three tenths off of her lifetime-best, set at last summer’s nationals.

Second place was Club Wolverine’s Ali DeLoof, who has been starting to establish herself as a top-tier threat as well. DeLoof went 1:01.07 to beat Georgia’s stud rising sophomore Olivia Smoliga (1:01.36) and Bulldog grad Megan Romano (1:01.85).

3 more Bulldogs came in next, giving Georgia slots three through seven. Hali Flickinger went 1:02.04 for 5th, swimming a double with her 200 fly from earlier on. Rachel Zilinskas was 1:02.47, and Jordan Mattern took 7th at 1:02.87. The final championship heat slot went to the Bolles School’s McKenna DeBever at 1:03.45.

It’s been a banner weekend for Michael Phelps, who is gaining tremendous steam in his career comeback as of late. He followed up a great 100 fly on Friday night with a 53.88 in the 100 back to win tonight. That time ranks him just outside the top 10 in the world this year, and topped fellow swimming icon Ryan Lochte, who was 54.40 as he returns from a knee injury that has sidelined him for the better part of a year now.

Behind those two was Tyler Clary, 55.41 coming off his second-place 200 fly effort. He bridged the gap between Phelps/Lochte and the rest of the field.

Maybe most notable in this race was Olympic silver medalist Nick Thoman, who had a rough prelims (57.42), but is listed at 1:15.83 in the final. It appears Thoman went for the first 50 split, crusing the second half of the race. He did go out in 25.3, which would be the second-fastest American time in the 50 back so far this year (David Plummer has been 25.2).

The whole 200 breast field made some substantial improvements from prelims, highlighted by a great race for the win. Micah Lawrence, who has been crushing 200 breast fields on the Grand Prix circuit was dead even with Georgia star Melanie Margalis at the 100 mark. Things stayed shoulder to shoulder the rest of the way, with Margalis overcoming Lawrence by just over half a second down the stretch for the win. Margalis went 2:27.06, Lawrence 2:27.66.

A half-second behind the lead pair halfway though, Margalis’s Georgia teammate Annie Zhu went 2:26.68, almost running down Lawrence at the finish.

Auburn’s Annie Lazor took fourth at 2:30.25, and fifth went to new short course American record-holder Emma Reaney at 2:30.45. Reaney is spending the summer at SwimMAC after a breakout junior season at Notre Dame.

Bulldog Swim Club’s Emily Cameron was 2:32.24 to take sixth. North Baltimore’s Lauren James went 2:36.92, about the same as prelims. Another interesting finals swim for a SwimMAC swimmer: Katie Meili faded to 2:46.87. Her splits weren’t available on Meet Mobile, but we’re told she went for a 100 split and cruised the back-half, just like Thoman did in the men’s 100 back.

Georgia’s Nic Fink had a great swim, coming within two seconds of his lifetime-best to go 2:11.76. That crushed the field by nearly four seconds, as Fink’s Bulldog teammate Chase Kalisz (competing for NBAC over the summer) was second back at 2:15.30.

Close behind Kalisz was the Bolles School’s Anton Lobanov at 2:15.58. From there, things spread out quite a bit. Gabriel DeSousa out of North Baltimore went 2:17.91, and Auburn’s Michael Duderstadt was 2:19.05 for fifth.

Michigan Wolverine Paul Corbae took sixth at 2:22.49. About a second back was Basil Orr, Dynamo’s 18-year-old, and Georgia Bulldog Ty Stewart, competing for SwimMAC, went 2:24.81 to round out the championship heat.

A lifetime-best for Cal signee Cierra Runge: the North Baltimore freestyler went 4:07.67 with a giant 400 free, blowing out a tough field by over three seconds. Runge knocked a half-second off her own lifetime-best as she continues to heat up this summer. That win is huge, coming over a field packed with Georgia and NBAC swimmers, two clubs that have done very well in the mid-distance events over the years.

Georgia’s Jordan Mattern was second at 4:10.75, a solid margin ahead of her teammate Amber McDermott (4:12.20). From there it was the North Baltimore show, with the club taking 4 of the final 5 spots in addition to Runge’s win. Becca Mann was 4:12.95, Sierra Schmidt 4:14.70 and Allison Schmitt 4:15.98. Georgia commit Stephanie Peters got in for seventh before NBAC’s final swimmer, Gillian Ryan, touched the wall.

In the B final, Georgia’s Shannon Vreeland went 4:15.57 to pick up the 9th overall spot.

Results of the 400 free are currently unavailable on Meet Mobile, but we’ve been told Connor Jaeger picked up the win in 3:45.3. That beat Yannick Agnel‘s 3:49.1, relegating the French star to the silver medal. Matt McLean went 3:52.2 for third, and Club Wolverine’s Michael Klueh was 2:52.5 to take fourth place.

i say Thoman wins it

ok…will see 😀
all the best to Nick Thoman!

we shall see. I doubt he is in top form

Why so many thumbs down for the comment “Thoman wins it” ?

Maybe they were just disagreeing with the assertion that Thoman would win it.

Oh boy.. hahaha. I really think Thoman is going to show up later though.

Anyone got the splits for Phelps and Lochte?

yay! She goes onto the Commonwealth Games soon

Can’t wait to watch the action! Her vs. Campbell shall be good

I think it will be C. Campbell against the clock in Glasgow instead.

It will be tremendous if Arianna V. Wallace can medal at all. There are still other commonwealth swimmers faster than she: Bronte Campbell and Fran Halsall. Schlanger is also as fast.

Alabama was represented in the final by Allyx Purcell, who went 25.82, the last swimmer under 26 seconds. Keeping up the Alabama-Auburn rivalry, …..
Purcell swims at Auburn,

Lazor swims for Auburn as well!

I don’t expect a good time from Cullen until Nationals and even then I don’t know what to expect. I will say time is running out for him with the new talent coming up. Dressel 3 tenths off Jones time and he’s just ramping back up.

Anyone have insight on where Kathleen Baker is going to college?