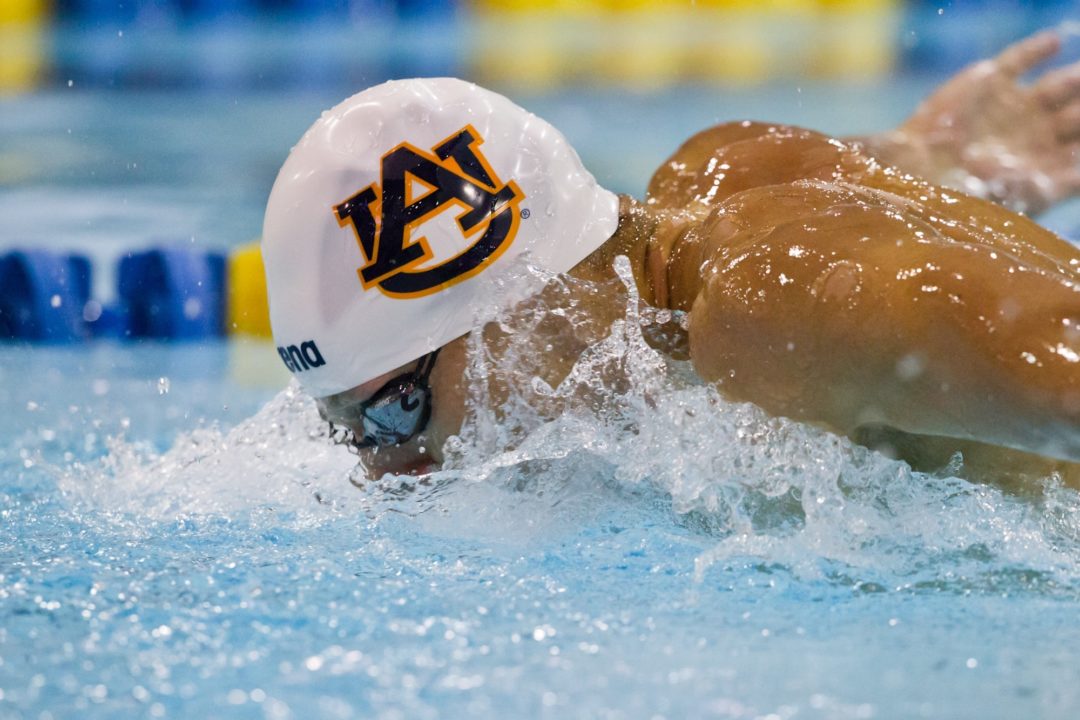 With Michael Phelps out of the picture, Tyler McGill is a heavy favorite to represent the U.S. in Barcelona this summer. (Photo Credit: Tim Binning, theswimpictures.com)

Regardless of whether or not anything comes from last week’s rumors, there is a big void in the international lineup for the U.S. this summer with the [temporary?] retirement of the greatest Olympic champion of all time, Michael Phelps.  Phelps had a spot in the men’s 100 meter fly on lock at every big international long course meet but one from 2002-2012 (the exception was 2006 Pan Pacs), winning three Olympic gold medals and multiple World Championships along the way.  That open spot, along with the likely absence of Trials finalist Davis Tarwater (he hasn’t competed since December), spells opportunity for a number of national team members and a few young guns at the upcoming World Championship Trials in Indianapolis, Indiana.

The closest thing to a lock in securing a spot in this event has to be Tyler McGill.  The former Auburn Tiger grabbed some big international experience a year ago in London, where he finished seventh in the 100 fly final (just 0.08 out of fourth) and grabbed a gold medal with his prelims swim on the 400 medley relay.  His 51.32 at Olympic Trials actually made him the second fastest performer in the world a year ago, behind only Phelps, the eventual Olympic gold medalist.

McGill should face a stiff challenge from the two biggest names in the field: five-time Olympic gold medalist Ryan Lochte and short course king Tom Shields.  Lochte almost pulled a fast one on the entire field a year ago at Trials, finishing third out of lane 1 in a time that would been fourth in London.  His prospects in the sprint fly this summer are better than they have ever been before; the departure of Phelps leaves an open spot, and Lochte’s decision to drop the 400 IM will save his legs for later in big meets.  Although he had a busy post-Olympic publicity circuit, it’s not like Lochte was completely out of the water.  He was training plenty this winter, and ultimately will have almost three fully-devoted months under his belt with coach Greg Troy before he rests.

While Shields has been dominant on the American short course scene for years, he has only recently started to establish himself in the Olympic-sized tank.  He made big steps last summer, finishing fourth in the 100 and ninth in the 200 at Olympic Trials, proving that he is capable of being an elite above-the-water swimmer.  His ascendence to the top ranks continued this fall during the FINA World Cup circuit, where he competed against (and, at times, beat) a loaded butterfly field that included 100 fly Olympic finalists Steffen Deibler, Yevgeny Korotyshkin, Chad Le Clos, and Joeri Verlinden.  When he returned to Cal for his senior campaign, he managed to raise the bar again, tying the American record in the short course 200 yard fly.  With NCAA swimming in the rearview mirror, Shields could take the next step internationally as he undoubtedly invests more time and energy into long course endeavors.

A pair of former Stanford teammates and current national team members—Eugene Godsoe and Bobby Bollier—will look to make the jump onto their first top tier international squad this summer.  Godsoe was an Olympic Trials finalist in the 100 fly and 100 back while training with David Marsh at Mecklenburg Aquatic Club, but has since moved back to Palo Alto to serve as an assistant on the Stanford men’s staff and train under Tony Batis in a relatively new post-graduate group (shameless plug: keep an eye out for a Batis interview and workout video in the coming weeks).  He followed up his best long course season ever with some incredible short course times this winter, posting lifetime bests in his top five individual events (the three backstrokes, 100 fly, and 100 free).

Joining him in practice every morning is Bollier, a butterfly specialist and fellow Cardinal alum.  While the 200 distance has always been more up his alley, Bollier has really adjusted his training this year to focus on more speed and power.  So far, it’s showing; he is the sixth fastest American this season.

For the last couple of years, rising college seniors Tim Phillips (Ohio State/Ohio State Swim Club) and Giles Smith (Arizona/Tuscon Ford) have had the misfortune of fighting for short course NCAA titles against the likes of Shields and Austin Staab, and long course team spots against Phelps and McGill.  The field has really opened up now, and one of these guys has to be poised for a breakthrough long course swims.  Phillips is a well-known “fly-and-die” swimmer, with more natural speed than just about any flyer in the world.  He’ll likely come into Indianapolis as the third overall seed, and if he has improved his final 15 meters, expect him to punch a ticket to Barcelona.

Two young guys worth remembering: Jack Conger of Machine Aquatics (formerly Rockville Montgomery, and soon to be Texas) and 16-year-old Justin Lynch of Terrapins Swim Club.  Conger will be looking to cement his status as an all-time great high school swimmers with a strong long course performance this summer.  The future Longhorn and #1 recruit in this year’s class (although you might be able to talk me into Ryan Murphy) is the third fastest American so far in 2013, and has been known to be an absolute taper monster.  Lynch broke 54 seconds as a 15-year-old last summer in Omaha and has showed no signs of plateauing; he swim a lifetime best 53.47 last month at the Arena Grand Prix in Mesa, Arizona.

All in all, it looks like 12 of the 16 semifinalists will be competing again this summer, including Maclin Davis, Kyler Van Swol, Jacob Jarzen, Matt Ellis, and Dan Madwed.

Keep an eye out for Barrett Miesfeld from NC State and David Nolan of Stanford.  Miesfeld, a junior, had an incredible short course season for the Wolfpack, dropping more than a full second from his sophomore campaign to earn All-American honors in the 100 fly at this year’s NCAA’s (he finished 7th).  With a best time of 54.49 from February 2012, Miesfeld will be further down the psych sheet, but the potential is there for a 53-low swim.  After a sub-par freshman year and Olympic Trials, Nolan returned to form this season, capturing two individual NCAA titles.  He was 53.05 back in 2010, and will have a chance to swim this without other events getting in the way (the only other thing he would swim that day is the 50 backstroke, which is the last event of the session).

Are you telling me that ALL of you guys, Morgan, Braden, Matt, and Reed are all picking the same top four picks? McGil, Shields, Lochte, and Phillips in that order? I sense collusion here! lol. Come on, someone’s got to pick Lochte or Shields first.

PAC12BBACKER – I’m putting all my money on Shields. I think he’s got what it takes.

Hahaha, actually for a long time, I had Lochte 2nd, Shields 3rd, and Godsoe 4th. I balked on that/had to check my Stanford bias, and changed my picks to what they are now. Braden, Matt, and Reed sent me their choices afterward, but I didn’t want to alter mine based on what they picked.

I know Tom died hard at the Mesa Grand Prix in the 100 fly, but I really think he’s the best hope for the United States in the 100m butterfly (unless Phelps returns). He’s a relay guy too, so he can probably throw down a fast split in the 400 medley (43 SCY split and 48 SCM splits are evidence enough). My bet is that he takes first, McGill second.