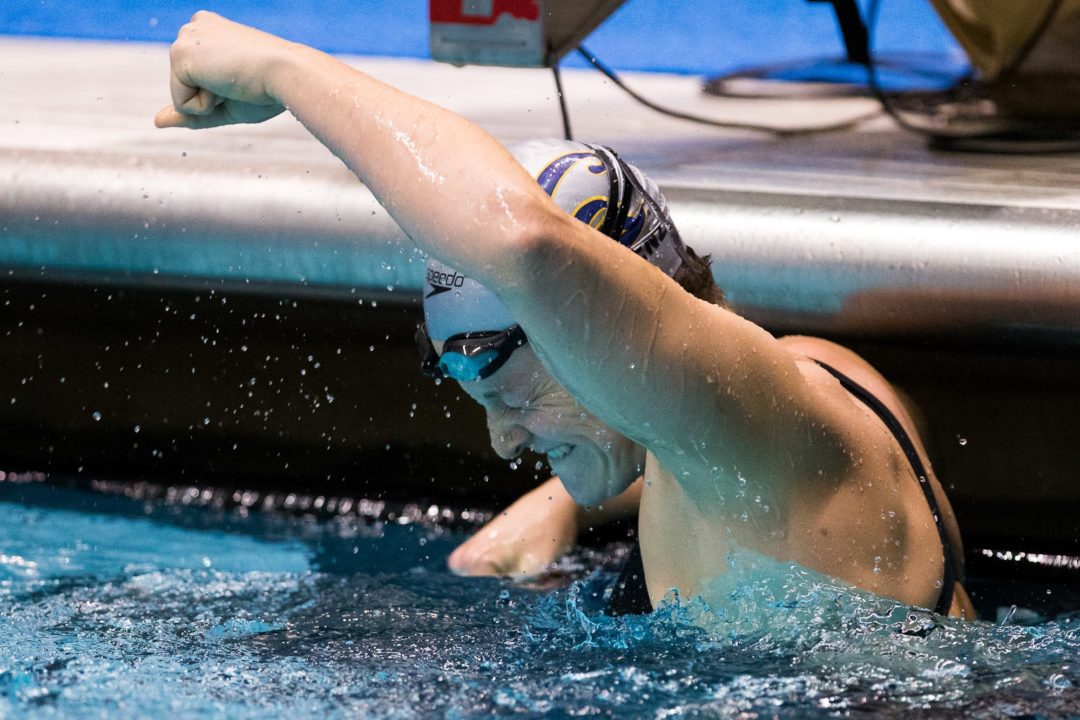 Cal's Caitlin Leverenz has raised her fist in triumph at the last two NCAA Championships, and last year's Olympic Trials, in the 200 IM. Can she make it four-straight? (Photo: Tim Binning/TheSwimPictures.com)

The global field of the women’s 200 IM is becoming increasingly interesting. Hungary’s inexhaustable Katinka Hosszu, the young British swimmer Siobhan-Marie O’Connor, the Chinese Olympic Champion Shiwen Ye, and Australia’s Alesha Coutts, among many, many others, are contenders for these medals. They all swim very different races, and they all come from very different places, which is what makes this race so intriguing.

The swimmer who really amps up the suspense of the women’s 200 IM, though, is American Caitlin Leverenz, who won the bronze at last year’s Olympics. There are some good breaststrokers (Siobhan-Marie O’Connor, her British teammate Hannah Miley) in the field, but nobody who swims the race like Leverenz does.

In the run up to 2012, Leverenz made huge improvements on the front-half of her race. During this year’s NCAA season though, her front-half took a little bit of a backslide, perhaps. She was a little further behind going into the breaststroke than normal, and looked a little more winded when she got there.

Here’s the thing though: she still won the NCAA title, which was her second straight in the event. Now Leverenz can turn her full attentions to her career as a postgrad and the long course attention it deserves (maybe she’d already done so by the time NCAA’s rolled around this year). She won the Olympic Trials last year. She was the fastest through the semi-finals also, in fact. I don’t think there’s anyone in the United States right now who can go a 2:10 as easily as Leverenz can, and that has to make her the favorite at Trials.

Ariana Kukors, the other American representative at the Olympics, hasn’t raced this year. We’ll count her out for Trials until we see or hear differently. The rest of that final was very young, and should all return for another crack at international representation.

Leverenz’s training partner Liz Pelton has an incredible freshman year at Cal. She should be the best backstroker in this race in the Indy final, for what it’s worth (unless Missy swims it – more on that later.) Stanford’s Maya DiRado and Florida’s Elizabeth Beisel come in close behind her in that category. Those top four are all battling with the same challenge of coming off of the NCAA season, as will most of the final: it doesn;’t look like there are likely to be any pure post-grad swimmers at the high end of this race.

There could be at least one high school swimmer to duke things out with what will be a college-heavy final. Cal commit Celina Li  from the Pleasanton Seahawks was 6th in this race in Omaha in 2012. She’s swum the race just once in long course all year, at the Mesa Grand Prix, and in 2:17.81 was considerably off the time of the one GP meet that she swam in the run up to the Olympic Trials (almost two seconds.) She was great in yards in December though (going 1:55.28), so maybe she’s shifted her focus to the high school season for her senior year. Hard to know.

Julia Smit is done. Morgan Scroggy appears to be as well. Justine Mueller, who was a 2:12 back in 2010, is racing a lot, but rarely is it the 200 IM anymore. It’s hard to imagine that Kathleen Hersey is finished (maybe it’s a “we don’t want to imagine”) but she hasn’t raced since Short Course Worlds either. We’ll leave her out of our predictions until we see an indication that she plans to swim in Indy.

Texas A&M’s Sarah Henry was a 2:12 in this race last summer before a great NCAA season (though it didn’t end as well as hoped at the NCAA Championships), but her best shots at Worlds is probably in the longer IM and the distance freestyles; she could certainly final in this race, however. It is one of two individual events she’s qualified to race at the World University Games, and the 200 IM probably is the paths of least resistance for her (as compared to the distance freestyles or the 400 IM.)

Jasmine Tosky didn’t have a great Olympic Trials in 2012, and didn’t have a great freshman year at USC; a few seasons ago, it looked like these 2013 Worlds might be her time to make a breakout, but the results haven’t been there for the last 12 months.

The most interesting young names in this race, in my opinion, are SwimMAC’s Kathleen Baker and the Delaware Swim Team’s Kaitlyn Jones.

Baker showed her abilities last week in her home pool at the Charlotte Grand Prix, where she won this 200 IM despite being the youngest A-Finalist, in 2:14.46 – easily a lifetime best for her. It shouldn’t be any huge surprise, though, given her versatility that she’s a great 200 IM’er. She was under 1:01 over the weekend in the 100 back. She was a 58.0 in the 100 free when she was just 13 (though we haven’t seen much progress there). She’s been a respectable, though not spectacular, 1:02.1 in the 100 fly. The real kicker, though, is that she’s been a 1:11.8 in the 100 breaststroke: a very good result for a non-breaststroker of her age.

In late February, Jones, who is under the training of a new coach this season, broke Missy Franklin’s National Independent High School Record in the 200 yard IM (which has since been broken) in 1:56.31. That’s almost three seconds faster than she had been coming into the 2012-2013 season. She’s been a 2:14.31 in long course, which by a parallel drop could be an World Trials final. She needs to maybe get a bit more out of her backstroke, and finish her race a little bit better, but she’s an IM’er like Ariana Kukors: she’s never going to blow the field away in any one stroke, but she’s not going to give up much ground anywhere either.

Of course, if we’ll mention Jones, we have to mention Ella Eastin, who broke Jones’ record (crushed it, really) just last week. She’s interesting, because despite being 1:55 in yards and one of the fastest in the country in short course, her best long course swim is right at a 2:17.0. That will surely come down this summer, however.

The two other swimmers I really like in this event are Texas post-grad Karlee Bispo, who broke out with a 2:12.49 at the Austin Grand Prix in January, though she took a big backslide at the Mesa Gand Prix (added more than four seconds); and USC junior Meghan Hawthorne, who needs to show that she can come back with an evening swim as good as her morning swim (something she’s struggled with in the 200 IM both at this year’s NCAA Championship and last year’s Olympic Trials.)

Then there’s a lot of great breaststrokers. Emma Reaney from Notre Dame, Melanie Margalis from Georgia, Andrea Kropp from USC. Any of them have a puncher’s chance at a final, though if there were one who could just explode and make the trip to Barcelona, it would probably be Reaney, who was 9th in prelims last year at Olympic Trials in this race. She’s the least experienced of those three at this level, however. Margalis had a great junior season for the National Champion Bulldogs, and will be hungry after getting DQ’ed in prelims of this race in Omaha.

A note: Morgan Priestley thinks that with the reworked format for the World Championships and their Trials, that Missy might swim the 200 IM on the last day. She was a 2:11.69 in long course in 2010, so the talent is definitely there. The Franklin camp is typically tight-lipped on her events, but I tend to believe that she’d swim the 50 on the last day of the meet rather than the 200 IM, but either is a distinct possibility. The only other races that day are the non-Olympic distance swims, so no conflict with her primary events. Morgan picked “with Missy,” I picked “without Missy,” but either list would change if those details firmed up.

Err…changed to what I meant to say. If she drops three seconds in long course, she’ll final at World Trials.

Missy? No! I like her but she has no butterly and no breaststroke. Hard to be a world-class IM swimmer with these weaknesses. Perhaps one day.
Miss Pelton and Miss Leverenz are the 2 logical favorites. I want to see Elizabeth in 2.08 this year. It’s just a question of improvements on breaststroke or not. She has 3 other great strokes. She has to sleep breaststroke, to eat breaststroke, to think breaststroke, to work breaststroke 24/7! Her olympic gold future is in this race! Not in the 200 back. She has 3 years to improve her breaststroke to be ready for Rio.
I would like to see Maya DiRado in the American team this year. But I think… Read more »

I agree with Bobo re: Missy in 200 IM, although can’t say I wasn’t surprised to hear his objective analysis about Missy’s chance in 200 IM, being a huge fan of Missy and all 🙂

That is Beisel strongest shot for gold.. but I think we haven´t seen everything from Ye and Katinka yet… Probably any swimmer might have to aim for a WR to get gold on 200 IM 2016…

Beisel? Absolutely no chance. The 200 IM is too short for her.

Beisel might have developed more speed this year, but yes I agree, the 200 is a bit too short for her.

I included Missy in the top 3 or 4 because:
(1) she was 2:11 in 2011 and 2:12 at a Grand Prix this year
(2) she hasn’t swam this race at peak rest in a loooonnnnggg time
(3) her World Champs/World Champ Trials schedule lines up really well… her two shortest individuals that she could/should qualify in (50 and 100 back) are her only individuals on days 3 and 4, and she doesn’t have anything else to swim on day 5 unless she chooses to give the 50 free a whirl (entirely possible).

Don’t think she’ll make the team in the event, but I think she’ll be primed and ready for a good swim on day 5… Read more »

Didn’t she also drop a 1:02 in breast this year scy? Not exactly “no breaststroke”

you guys aren’t projecting her even in the final? meets like this were MADE for rising star meteoric rises. i think she’s gonna be big!

I know this is kinda late to comment now lol, but I think Missy could end up a great IM’er if she swam it more, watching her at the short course sectional champs in federal way, she swam breastroke in the relay, and her 100 was a 1:04 which isnt horrible and when she did the 50 she went 28 and that is pretty fast. Also, Ella Eastin went 2:17 when she 14, and Ella’s 400IM was 4:51 when she was only 14, although she does excel at short course more, she has amazing turns, it’s too bad ella hasn’t dropped more, she was a phenom as a 12-under and and amazing 13yr old, but she’s slowly pleatued since then