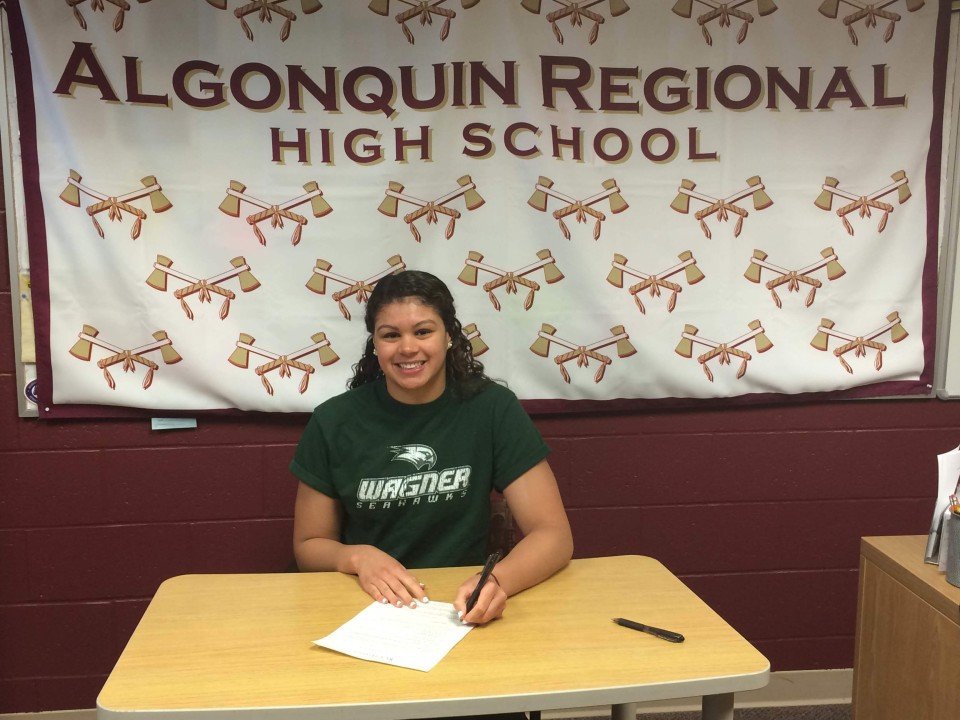 In the 2014-2015 season, Wagner College sent its first-ever swimmer, Anu Nihipali, to the NCAA Dvision I Championship meet. Current photo via Wagner College

Wagner College head women’s swimming & diving coach Colin Shannahan has announced that Dorian McMenemy, who competed for the Dominican Republic in the 2012 London Olympic Games, has signed a national letter of intent, and will enroll as a freshman in the fall of 2015 with four years of eligibility.

While competing as a 15-year old at the 2012 Olympics, McMenemy was the only female swimmer on the Dominican team and finished 41st overall in the women’s 100-meter Butterfly. McMenemy, whose mother is from the Dominican Republic, has dual citizenship with the United States and resides in Massachusetts with her parents and three sisters.

Named the 2012 Dominican Female Athlete of the Year in the wake of her competing in the Olympics, McMenemy’s international resume includes competing at the 2011 Shanghai World Championships, 2013 Barcelona World Championship, and the 2014 Nanjing Youth Olympics.

17972″I’m extremely excited about adding Dorian to our swimming and diving family,” said Shannahan, a two-time Northeast Conference (NEC) Coach of the Year, who completed his fourth season on Grymes Hill in 2014-15. “She is young, enthusiastic and passionate about the sport of swimming. Taking part in international meets has helped her gain a lot of confidence that she will bring to our program.

“She will make an immediate impact for us in both the sprint free/fly events but especially in relays,” Shannahan continued. “We can’t wait for her to arrive on campus to begin training for both NEC and international competitions.”

After playing varsity basketball and volleyball during her freshman and sophomore years at Algonquin Regional High School in Northborough, MA, while swimming club for Evolution Aquatic, she joined the Tomahawks’ varsity swim team for her junior and senior seasons. In her two years on the swim team, McMenemy set seven school records – in the 50 Free, 100 Free, 200 Free, 100 Butterfly, 200 Free Relay, 400 Free Relay, and the 400 Medley Relay – and has only been beaten by another female swimmer on one occasion.

McMenemy is also a two-time state champion, and meet record-holder, in the 50 Free (23.57), the 100 Free (50.69) and a two-time 100 Fly Central/South Sectional Champion (55.81). She was also a two-time Midland Wachusett League MVP, and two-time Algonquin Regional High School MVP, in addition to being a two-time Boston Herald, Worcester Telegram & Gazette, and Metrowest Daily News All-Star.

The incoming Seahawk is also a member of the prestigious 2013-14 USA Swimming Scholastic All-America Team which requires a student-athlete to hold a minimum 3.5 GPA for the current academic year while making a Junior National cut time in any specific event during the given qualifying period.