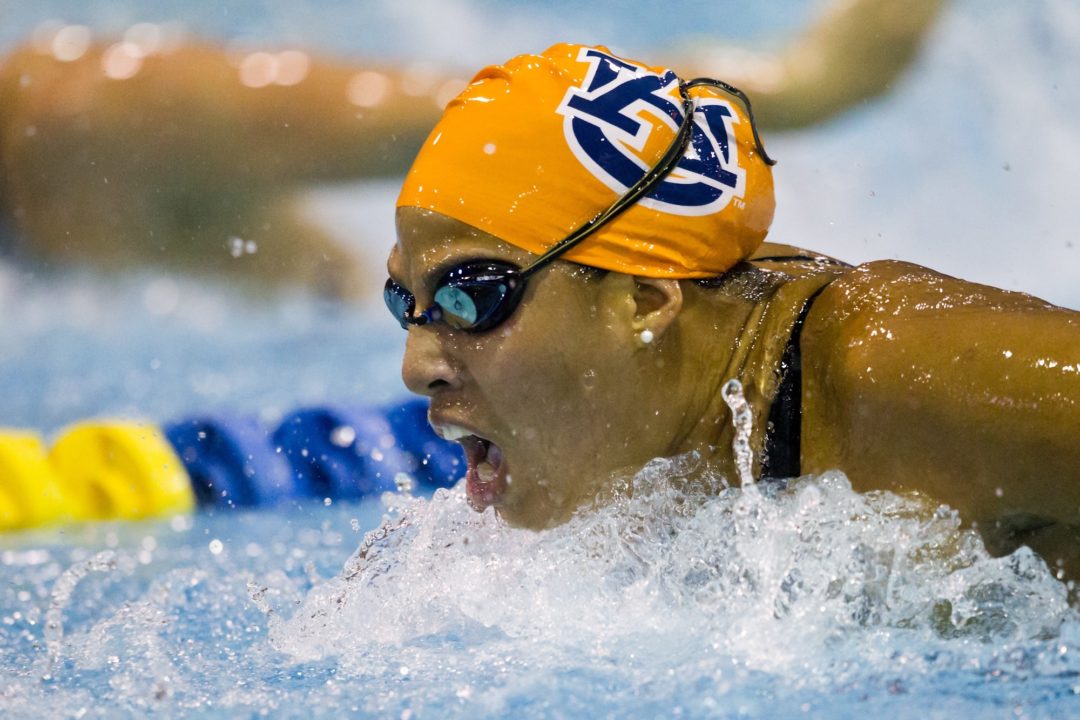 To see all of our 2012-2013 College Swimming Previews, check out the category page here.

2011-2012 Lookback: The Auburn Tigers tied for 7th at NCAA’s last season, but probably could have been 6th. Arianna Vanderpool-Wallace had Olympic aspirations, which cost her an NCAA title in the 50 free (she still took one in the 100).

Vanderpool-Wallace has exhausted her eligibility, which will leave an obviously big hole in the Tigers’ lineup. But the Tigers are still high on their chances to get back into the top 6 for the first time since 2008, when they were the national runners-up, and with good reason.

Olympic Finalist: The reason the Tigers are able to overlook the loss of an Olympic finalist like Vanderpool-Wallace is because they’re getting one  back, if for only a season. That is because Micah Lawrence is returned to Auburn as a team Captain following a berth in the Olympics in the 200 breast, where she finished 6th in the final.

She is the Auburn Record holder in both the 100 and 200 yard breaststrokes, by far, but the last time we saw her in NCAA action in 2011, she failed to final in either distance at NCAA’s. The year before, she scored only a single point with a 16th-place finish in the 200. Her most successful season at the NCAA level was her freshman year, where she tied for 5th in the 200 (though still didn’t score in the 100).

But last season, while taking some time off from her classes and training at SwimMAC Carolina, something clicked for Lawrence. She stepped up in the biggest race, and earned her way onto the Olympic Team. She’s still a better long course swimmer than short course swimmer, but at a minimum a pair of A-Finals should be in the works for her (the women’s breaststrokes will be stacked next season, and despite her lofty finish at the Olympics, she’s going to have a huge battle on her hands).

Who’s Stepping Up?: Based even just on specialty (top sprinters are more valuable than breaststrokers in the college format), Lawrence alone won’t be enough to fight back into the top 5. Afterall, they were 40 points back of that position last season. This team doesn’t have quite the starpower of past Auburn teams (outside of Lawrence), but junior Olivia Scott is certainly headed that way.

She was 2nd at the NCAA Championships last season in the 100 fly with a 51.61, making her the fastest returning swimmer in the event nation-wide. She will compete with Tennessee’s Kelsey Floyd for both the SEC and NCAA Championships in the event that she broke the School Record in last season. (Yale senior Alexandra Forrester, and one of the Cal freshman depending on what Teri McKeever decides on for her lineup, will also be in the mix there).

This season, the hope will be that Scott’s sprint freestyles will improve enough to help absorb AVW’s loss in the free relays. She was good last year at NCAA’s, with bests of 22.5 and 48.8 on flat-starts, but she still just-missed scoring individually in either event (in the 100, only by about two-tenths). This year, she’ll shoot for being at least a two event scorer, and will hope to take up a good part of the relay slack as well.

Breaststroke Group: The breaststrokes historically have not been Auburn’s top specialty (though any program with a history as good as this one obviously has had some stars), but this current group might be the best they’ve ever had, top-to-bottom. It starts with Lawrence, but goes well beyond that.

Between the group of Abby Duncan (59.99 last season) and the Norberg Twins (Lindsay and Lauren) and Sarah Peterson (a 200m specialist), this year’s team will have four out of the school’s all-time top 10 in each of the breaststroke distances. The Norbergs and Lawrence will both run out of eligibility after this season, but Duncan and Peterson are both only coming into their sophomore years.

In addition to those mentioned above, Auburn head coach Brett Hawke made his program even stronger this season through two internationally-based additions to his roster. Tryshia Centeno-Rosa, a Puerto Rican transfer from Indian River State College (the dominant Junior College program in the US), and Pippa Cochran from the UK.

Centeno-Rosa has been a 1:01.8 and 2:14.4 in yards, and comes in with three remaining seasons of eligibility. Cochran hails from the Millfield club in England, coached by one of Hawke’s former coaches Jolyon Finck. She’s already been a 1:10.6 in long course, which should make her a 1:01 or so in yards as a base-line.

Having such a strong, deep group always runs the risk of seeing a casualty or two, but properly managed could create a fantastic training environment.

Backstroke Group Explodes: In contrast to the breaststrokes, Auburn has a huge history in the backstroke events. They’ve won more SEC Championships in the 100 back (11) than any other event aside from the 400 IM (12 – surprising until you think about it). But last season, they had just one young sophomore carry the load: Emily Bos, who was 18th at NCAA’s and topped-out at 52.52 leading off the Tigers’ 400 medley relay.

Bos will again be at the forefront of the backstroke group, but much like he did with the breaststrokes, Hawke has brought in a veritable army to back her up this season.

It starts with Jillian Vitarius out of Kingwood, Texas. She comes in with bests of 53.3/1:54.0 in the 100 and 200 backstrokes: times that would have 2nd and 1st, respectively, on the team last season. The latter time would have placed her near the top 10 at NCAA’s last season. Then, this summer in long course, she made the Final of the 200 back at the Olympic Trials with a 2:11 to gain even more exposure and experience. There weren’t a whole lot of All-Americans who graduated in that event last season, and there are a lot of good backstroking freshman nation wide, but immediate points in the 200 should be an expectation.

Transfer Reinforcements: A huge portion of the replacement of Vanderpool-Wallace’s spot will fall to Arizona transfer Aubrey Peacock, who came over this summer with Wildcat teammate Hallie Stupp.

Peacock is an All-American and another big-time backstroker for this team. Though she didn’t have a great 2012 NCAA Championship meet, she has bests of 53.3 and 1:53.7 in the 100 and 200 backstrokes, respectively.

Sprinters: How we waited so long to get to the sprinters is still a mystery to us, but here’s where Auburn will really be fighting for NCAA position next season. Aside from Vanderpool-Wallace, Auburn returns their next 5-best sprinters from last year. That includes 48-highs from Hannah Riordan and Olivia Scott, and probably another one this season from junior Haley Krakoski. Sophomore Megan Fonteno swam at the Olympics for American Samoa over the summer, which is a great experience for her, and was a 49-mid last season.

But they will still need Peacock to step up and be a great freestyler for them as well. She has flat start bests of 22.7/50.0 in the 50 and 100 freestyles, but did her best work on relays (she anchored Arizona’s 200 free relay in 22.0 last season).

Other Contributors: Prior to last season, Auburn swimmers whispered to us that Katie Gardocki was going to have a breakout year, and that she did. She peaked with a 16:06.14 in the 1650 at SEC’s, giving a nice distance wrinkle to the Tigers’ lineup (similar to what Zane Grothe has done on the men’s side). She was only a 16:14 at NCAA’s, but that was still good enough to grab a pair of points.

Other Freshmen: Filling out the Tigers’ freshman class are SwimMAC’er Caroline Bryant, Tallahassee-native Alex Merritt, and French butterflier Valerie Inghels. Bryant has a best of 55.0 in the 100 yard fly (from her junior year of high school), and Inghels has a 1:02.5 in the 100 fly in long course. Inghels’ best 50 and 100 fly are better than her best 50 and 100 free, so her potential gives a bit of an aura of mystery.

These swimmers will help fill in a butterfly group that graduated two of their three best after last season. It’s likely that Merritt will be called upon in some free relay duty at dual meets (50.3/1:48.8 bests) with an eye toward potentially becoming a big part of the Auburn free relays as a sophomore and beyond.

Diving: The Auburn Tigers have have relied on Vennie Dantin for a long time to carry their diving group. The All-American is now graduated, as is their other NCAA scorer Anna Aguero. This leaves coach Jeff Shaffer with a crew of 5 freshmen and sophomores to work with. The star of the incoming class is probably Carly Scheper, a high school teammate of the aforementioned Forman in Kentucky. She’s talented in all three disciplines, and is an AAU Diving Age Group National Champion.

Sophomores Cinzia Calabretta and Shanna Schuelein were both scorers at SEC’s last year, and will be looking to make the leap to NCAA’s this year.

2012-2013 Outlook: The Tigers lost two huge chunks of points from last season, but other than that stayed largely intact. When we really break down the incoming class, this is a great group of freshmen and transfers that speaks to the great long-term health of this program. This is a group that trains hard, and could do some special things down-the-line.

But in 2013, where can they be? Can they absorb the hit from the loss of Vanderpool-Wallace, who will go down as one of the greatest in the history of one of the country’s great programs? They are a deeper team this year, so they should fare better than their 4th-place performance at the SEC Championships in 2012. The well-time transfer of Aubrey Peacock should keep the top-end of their lineup about as strong as last season. There’s a lot riding on continued development of Olivia Scott, but if she “gets there,” the free relays should be every bit as good as they were with AVW.

This team will again be in a fight with Tennessee and A&M for a top-6 finish. The Aggies are young, and the Volunteers are in about the same position as the Tigers (losing one big piece, good incoming class), but I’d take the Tigers to just edge the Vols for 7th; but just barely.

Kate criter is actually swimming for the badgers now, she switched her commitment this spring.

Arianna Vanderpool-Wallace had Olympic aspirations, which cost her an NCAA title in the 50 free (she still took one in the 100).

I would argue it was her start that cost her the 50 free NCAA title….she didn’t have her usual elite level start and came up behind Jensen and Geer at the 15.