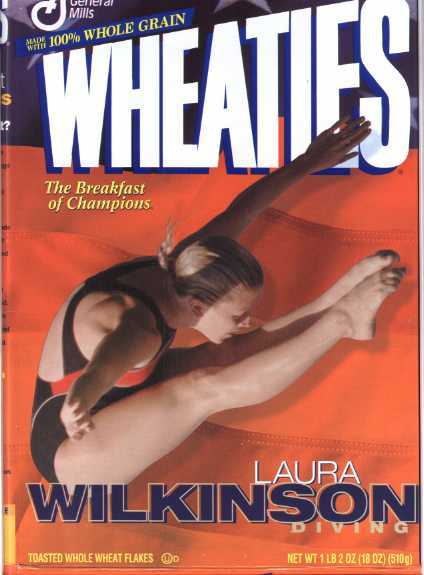 American diver Laura Wilkinson is set to be one of 17 aquatic contributors inducted to the International Swimming Hall of Fame... Archive photo via ISHOF

American diver Laura Wilkinson is set to be one of 17 aquatic contributors inducted to the International Swimming Hall of Fame in the class of 2017.

That Wilkinson win is 1 of just 4 women’s events not won by the Chinese diving powerhouse dating back to the 1984 Olympic Games – totaling 28 contested events.

Other members of the classs:

Laura Ann Wilkinson was born on November 17, 1977 in Houston, Texas. Inspired by the publicity surrounding Romanian gymnastic guru Béla Károlyi’s arrival to that city, in 1981, Laura fell in love with gymnastics dreamed of being in the 1996 Olympic Games. But after years of training her gymnastic career ended when a growth spurt during puberty made her too tall for the sport. Then, one day while at a swimming pool, she discovered another sport after seeing an ex-gymnast friend who had switched to diving execute an impressive dive.  In spite of  being told by one of her teachers that she was too old to start a new sport, at the age of 15, Laura plunged into diving anyway.  She joined a local club and says she “fell in love with the sport on the first day.”

She didn’t go very far her first year, but the next year Wilkinson won her first US National Title, made the US National Team, and earned a bronze medal at the FINA World Cup in the 10m synchronized diving event, with partner Patty Armstrong.  Earning a scholarship to the University of Texas Wilkinson won the NCAA 10m platform title in 1997 and 1999 and then gave up her scholarship to turn pro and train for the 2000 Olympic Games, at the Woodlands, with coach Kenny Armstrong.

Three months before the Olympic trials, she was doing a typical warmup, flip, somersault, when she landed on a block of wood and broke her right foot in three places.  To fix it, doctors had to re-break everything and they also found she had stress fracture on her left foot as well.  It appeared that another Olympic dream was at an end. But with a persevering heart and faith, she was not deterred by this injury.  In fact, it may have helped her focus. Together, with her coach, Wilkinson embarked on a brutal training regime that included standing in a cast for six hours a day on top of the platform to practice her push-offs. As soon as the cast was removed, Wilkinson began practicing dives underwater, to avoid putting pressure on her foot.  She also watched an “insane amount of video tape” and “visualized every dive” to keep her “head in the game.”

Although her foot was still not fully recovered when she started to train again three weeks before the trials, her perseverance paid off as she won the trials and qualified for her first Olympic Team.

Three months later, while wearing a protective shoe that enabled her walk up the ladder to the platform, Wilkinson battled back from eighth place and a 60-point deficit after the semifinals to record one of the biggest upsets in Olympic diving history. The turning point came in the third dive of the final round, a reverse two-and-a-half somersault, which Wilkinson performed perfectly, entering the water knife straight with barely a ripple. She went on to win over the favored Chinese diver, Li Na by a minuscule 1.7 points.  Her win was the first in the 10m platform event by an American since Leslie Bush, in 1964 and the accomplishment earned her an appearance on a Wheaties’ cereal box and a finalist for the prestigious Sullivan Award as one of the nation’s outstanding athletes.

In 2004, although Laura won the World Cup she finished a disappointing fifth at the Olympic Games in Athens. But she came back the next year to win the gold medal at the FINA World Championships in Montreal.  She retired after competing in her third Olympic Games in Bejing as 14  time US National Teams (1995 – 2008),  a 19 -time US National Champion and one of the greatest divers of all time.

Today, Laura continues to follow her faith, is a devoted wife and mother, motivational speaker, writer, mentor and encourager.  Her passion shines through her speaking as she takes her audience on a leap of faith. The lessons she has learned throughout the peaks and valleys of her diving career have given her an insightful outlook on life and have taught her how to be successful in and out of the pool.

Laura is by far one of the most stand-out athletes of the last 2 decades. Having gotten to know her this year as she’s training at Texas A&M University, it is obvious her experience, drive, her knowledge athletics at the highest level and the jenuine humility are just some of the ingredients she possesses in order to help Laura become once again, America’s sweetheart in the pool. Laura is dedicated to applying her legitimate ability to regain her competitive titles. Her abilities and instincts as a world chamnpioship athlete are very much alive and well.
“Here comes your hero, watch her as she goes “