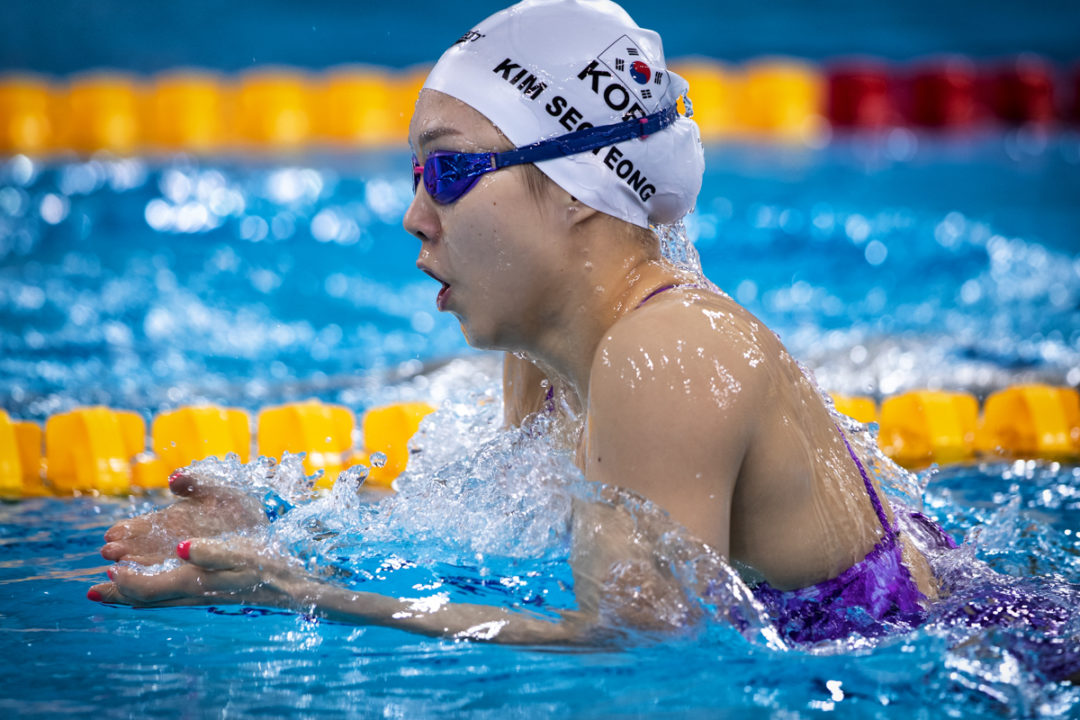 Kim Seoyeong put up the world's 12th fastest 400m IM time at Korean Nationals #2 to qualify for this summer's World Championships on her home turf. Archive photo via “Rafael/Domeyko Photography”

The Korean National Trials meet taking place in Gimcheon Swimming Pool is half way through and we’ve already seen 2 National Record bite the dust even with out Korea’s Olympic star Park Tae Hwan in the water.

Im’s previous season-best came at the Korean National Trials #1 meet that took place in early March. At that meet at this same pool Im put up a time of 1:00.84 to take the gold. Her outing also obliterates the 1:01.08 she produced for 5th place at last year’s Asian Games.

Her performance tonight qualifies her for this summer’s World Championships on her home turf, comfortably clearing the FINA A cut of 1:00.44. she also sits just outside the top 25 performers in the world this season.

The other national record to break happened in the women’s 1500m freestyle, where Han Da-Kyung punched the wall in a monster time of 16:32.65. That took nearly 20 seconds off of her own previous personal best of 16:51.27 produced back in 2013. Han finished 6th in this event in Jakarta last year, logging a time of 16:58.57, while her time where would have garnered Han 4th place.

In the men’s 200m breaststroke, Cho Sungjae blasted a monster personal best of 2:10.72 to top the podium and earn a FINA A cut in the process. His time was withing range of the Korean National Record of 2:10.19 and demolishes his previous lifetime fastest of 2:13.86 he logged for 6th in Jakarta at last year’s Asian Games.

Instead, Cho’s time tonight would have earned him 4th place beating out China’s Yan Zibei.

Finally, Kim Seoyeong produced her season-best 400m IM time, crushing the field in a mark of 4:38.83. That checks-in among the world rankings at #12 and serves as a promising sign that the 25-year-old may challenge for the podium for a medal in her home country at this summer’s World Championships.