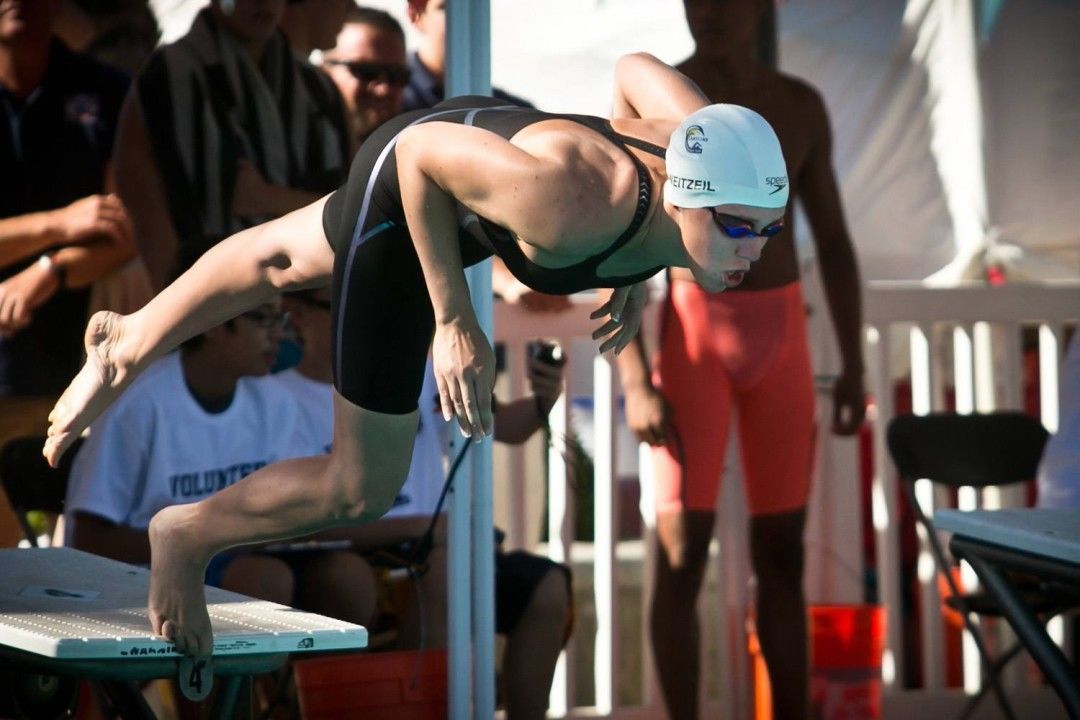 While many of the world’s top swimmers are competing at the Arena Pro Swim Series in Orlando, sprinters Abbey Weitzeil and Santo Condorelli opened up the American Short Course Championships tonight in Austin, Texas with statement swims in the men’s and women’s 50 meter freestyle.

Weitzeil, who is currently training with Condorelli at the Canyons Aquatics Club, was the star of the women’s events tonight with a lifetime best 24.72 to run away with the 50 meter freestyle.  That new best time propels Weitzeil into a tie for the second fastest American so far this season in the event.

On the men’s side, Condorelli closed the session with a 22.24, which ties for the second fastest time of his career with his performance last November at the Arena Pro Swim Series in Minneapolis.  Condorelli has become one of North America’s most consistent sprinters over the last 12-18 months, and with his rate of improvement and confidence coming off of last year’s Pan American Games, he’ll be one to watch in Rio.

Longhorn Aquatics’ Andrew Wilson, the star of this morning’s prelims, couldn’t match his 59.91 from earlier today in the 100 meter breaststroke, but posted a very respectable 1:00.40.  That’s still one of the five fastest times of his career, and with Cody Miller’s DQ at the Orlando Arena Pro Swim Series tonight, Wilson remains the only American under the 1:00 barrier in 2015-16, and the 6th-fastest swimmer in the world so far.  The Emory redshirt took the race out a bit harder tonight than this morning (27.85 vs. 28.14), and appeared to pay for it coming home.

Jessica Hardy–another Olympic breaststroke hopeful–nearly matched her season-best time from this morning with a 1:07.74.  Fellow National Team member Laura Sogar slipped from second to third tonight with a 1:11.24.

The 18-and-under swimmers on hand opened up the session tonight with three straight wins in tight battles.  16-year-old Aquazot swimmers Katie Glavinovich and Kate Krolikowski went 1-2 in the women’s 400 in 4:49.18 and 4:50.23, while their 18-year-old teammate Danny Yos swam a lifetime best 4:29.81 to win the men’s event.

The other winners on the night were:

Congratulations Katie G. So very proud of you.

I don’t think Weitzeil or Condorelli are rested for this meet. I don’t know why they would be considering Canadian trials are in April.

You are correct, they aren’t.

Nice new PB for Weitzeil in the 50 free. She’s on track for a sub 24.50 at olympic trials. That’s the minimum required to exist at the international level right now. For the medals, that’s more a sub 24 or at least a 24 low required.
But I’m more interested in her 100 free. I hope 2016 will be her breakthrough year in that event as 2015 was the breakthrough year for his training partner Santo Condorelli.
Let’s see what she has in store today. She’s probably very well rested for that meet so it would be a good sign if she swam close to 53.80.

Wilson, good 100 breast prelims, even if I remind everyone that a… Read more »

It used to be a very competitive meet, years ago, and never changed its name. It is mostly a “last chance” meet for men NCAA now, with a few club teams looking for travel meets.

Being an Olympic year and with NCAA allowing LC times they changed the format to be 2 days LC followed by 2 days SC.

Bobo– it looks like Eddie Reese may have had Wilson sprint the first 50 in finals to see what he could go–, at 27.85, Wilson was .3 faster than the 50 breast Wilson swam in January (he swam the 50 breast during the 50 free at Austin). Without any competition, there was no reason not to experiment.

Hilarious title of the meet!

1. I don’t see how they can call that meet “American championships”. Nobody believes that one second except them.
2. “short course” while the meet is held in long course

MikeH, because he has olympic games to prepare.
And since he trains in long course at Canyons Aquatic Club, he has improved a lot.

Amazing swims! Why is Santo not swimming for USC?