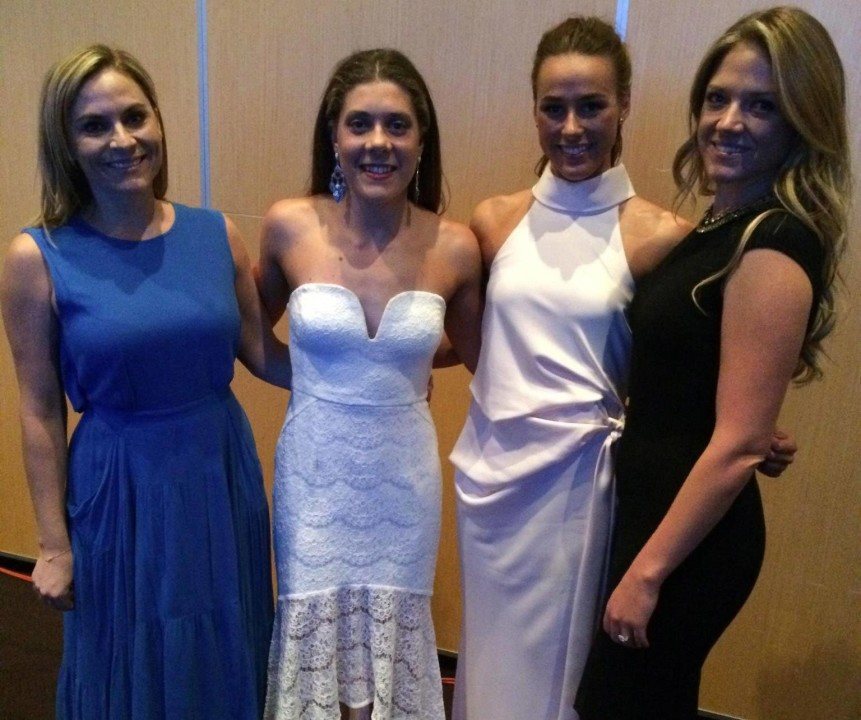 In Briefs: Tamsin Cook, 2nd from left, has been awarded the Railtrain Junior Sports Star of the Year. The 17-year-old is pictured here with Marguerite Oliver from the Hancock Family Medical Foundation, fellow Australian swimmer Brianna Throssell, and Gina Rinehart. Current photo via courtesy of SwimmingWA

Tamsin Cook Earns Junior Sports Award…..Western Australian stand-out swimmer, Tamsin Cook, has been named Railtrain Junior Sports Star of the Year. Cook was awarded the honors at the 2015 RAC Sports Star of the Year Awards gala earlier this week. At just 17 years old, Cook raced her way to a gold medal in the 400m freestyle at this summer’s Junior World Championships, setting a new championship record in the process. Focusing on her road to Rio for the 2016 Olympic Games, Cook says of her goal to make the team, “Representing Australia at the Olympics would be incredible, especially because we have such a proud swimming tradition. To put on the uniform was amazing when I was in Singapore at the FINA World Junior Championships.” Young Cook continued, “There will be a big block of training and it is going to be a lot of hard work.”

Western Australian OWS Canceled…..Round 5 of Western Australia’s Open Water Swimming Series at Coogee had to be canceled this past weekend due to health concerns of the water in which the athletes would be competing. Anecdotal information regarding swimmers coming away with skin rashes and irritations, as well as more than 700 pink snapper and blowfish turning up dead on the shores caused the 500m and 10km events to be postponed until December 27th.  Said Swimming WA of the cancellation, “After careful consideration … Swimming WA has made the decision to postpone round five due to a combination of factors, including the recent testing of water quality in Cockburn Sound following the deaths of high numbers of fish in the area.”  Additionally, Swimming WA chief executive Darren Beazley said, “We have a high number of participants in this round, with a large percentage registering to swim the five and 10 kilometre events. With our swimmers in the water for up to four hours, swimmer health and safety is foremost in our mind.”

Indefinite Pool Closure At Grenfell Campus…..Just this past week, Grenfell Campus/University of Newfoundland, located in Newfoundland, Canada, has announced the indefinite closure of its 40-year-old pool, with the doors scheduled to shut sometime in spring 2016. According to the campus’ Associate VP of Administration and Finance, previous deferred maintenance has boiled over to the point where they must act now. The pool deck’s concrete is disintegrating and the rebar is corroding, things that were were first identified 8 or 9 years ago, but have now been pegged by outside consultants as needing to be fixed quickly. The total investment to rehabilitate the pool is in the ballpark of $1.8 million. Said Bradshaw of the funding hurdle, “This is well beyond anything that we could handle within the normal annual operating budget of Grenfell Campus. We don’t carry that type of discretionary capital funding.” According to the Western Star’s report, approximately 600+ members of the surrounding community are registered in aquatic programs offered at the Grenfell campus. The facility also has contracts with Corner Brook Rapids Swim Club and Corner Brook Reflections Synchro.