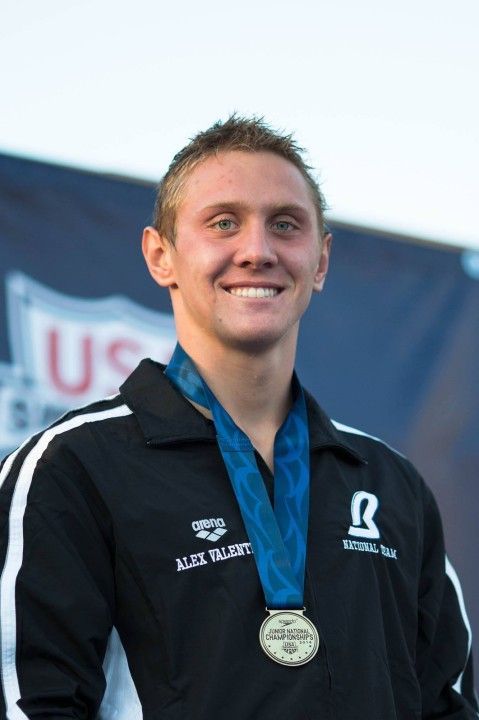 Alex Valente has made his college decision: he gave a verbal commitment to the USC Trojans for the class of 2019. Archive photo via Tim Binning/TheSwimPictures.com

The 10th-ranked recruit in the boys’ class of 2015, Alex Valente, has verbally committed to the USC Trojans, he confirmed to SwimSwam on Monday afternoon.

Valente shocked the world in January of 2013 when he was a surprise National Age-Group Record breaker at the California/Nevada Winter Sectional. There, he swam a 46.99 in the 100 yard fly to break Mike Cavic’s 12-year-old record for 15-16s: a mark that not even the great Phelps broke.

Since that swim, Valente’s success and name-recognition have skyrocketed. In yards, his bests are:

That 46.69 broke the CIF Southern Section Division I Record at the 2014 meet, taking the record away from Kyle Gornay (who beat Valente the year prior, but swam different events in 2014).

He trains with the Buenaventura Swim Club in Ventura, California, which is about 65 miles up the coast from USC.

“I chose USC because it’s a great school academically, and because Dave, Chase, and Jeremy really know what they are doing. It’s an ideal program for someone like me, with my events – 100 and 200 fly – the way they train for the shorter things. They’ve had a lot of success at the collegiate, national and international level. I definitely considered this going into an Olympic year.

Plus, Walker Bell and I both committed on the same weekend – he’s one of my best friends, and I’m really excited to be going to USC with him.”

I didn’t realize Valent and Bell were a combo package from Dos Pueblos. The only top 20 men’s recruit on the West Coast is sprinter Cole Cogswell from Hart. Just hopin’ he’s another combo to USC with Canyons swim club team mate Abby Weitzeil!

Yes, Cole Cogswell is the last of the bigger names on the list. I’m hoping he and Abbey end up at Cal 😉 Seems very possible, and Cal would seem to be a strong fit for both of them. Also, seems like the could both easily go to USC, as well, though I’m wondering if USC women have enough scholarship funds for Abbey…they already have 13 verbals! Huge class there, which will be a fun and bonding experience for all of them. Lucky 13… Cal has only 3 verbals that we know of on the women’s side, and 5 on the men’s side. Stanford also seems to have room… Arizona, too? Women have 10 verbals, men have fewer, so potential… Read more »

SwimmingIsGood – Cogswell isn’t the only big one left. #2 Townley Haas hasn’t committed either.

To me, Cogswell feels like a Cal guy and Haas feels like a Texas guy, but that’s just my humble opinion. Then again, Haas really seemed to enjoy his USC trip. We’ll have to see where they decide is best for them.

Oh yes, how could I forget Haas?! Super talented and will be a huge pick-up for whichever school is lucky enough to get him. Texas sure seems like a great possibility…I’m also thinking Michigan, perhaps. He has a great future ahead of him wherever he goes. Thx, Braden –

Cal men have 6 commitments so far. One hasn’t been announced yet on Swimswam.

That’s news I haven’t heard before!

SwimSwam is normally right on top of these announcements, there’s no better site for keeping track of the college recruiting scene.

Can you tell us who this 6th swimmer is? Inquiring minds want to know!

SwimmingIsGood – I’m working on the post for #6 right now. It’s not an earth-shatterer, just a good solid piece for depth.

…but since beggars can’t be choosers, what are his 2 best events?

Swim Swam announced today that Westlake H.S. swimmer David Puczkowski committed to the Bears. I haven’t kept count of names or numbers, but he might be #6.

No combo deal has taken place, but these are all great kids. I would be thrilled to see them all swimming for USC!

^
^
This was meant for the second thread

Congats to Alex and the Trojans. With Valente, Vissering and Mulcare, Trojans have the nucleus for an outstanding medley relay for years. And because USC’s NCAA points have been heavily skewed toward freestyle, these three additions will give USC “A Final” points in butterfly, breast, and back to go with their stable of sprint and distance freestylers. Now if only Salo could find an IMer….

Yes, very good recruiting this year by Salo and all. Valente is a fantastic addition…and with Vissering and Mulcare, along with Grissom, Monjay and Bell, the Trojans have a nice new class to look forward to next August. I think Mulcare will do quite well in the IMs, actually. With a little improvement, his 200 IM could be a day 1 event for him. Congrats to Valente – he’ll do some great things for ‘SC.