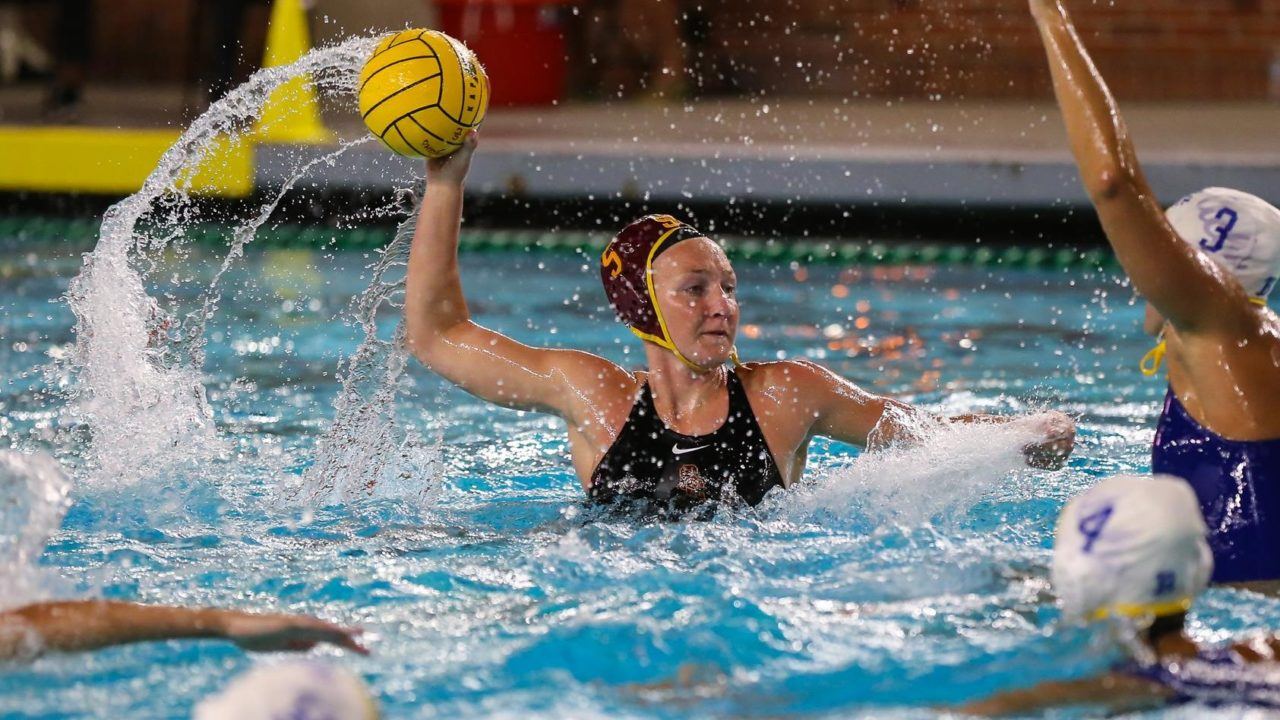 LA JOLLA, Calif. — The No. 1 USC women’s water polo team delivered two decisive performances to take home its sixth straight title at the Triton Invitational. After a solid 10-3 win over No. 8 Michigan in the semifinals, the top-ranked Trojans were up against rival No. 3 UCLA in the championship bout. There, USC shut out the Bruins for the first half while building out a hefty lead. The Trojans pressed on to a 10-3 victory to claim the crown and make it a 12-0 start to 2019 for the defending national champions, who now hold a 28-game win streak.

Against Michigan in the semis, the Trojans got out to a tight start, knotted up 2-2 with the Wolverines with goals coming from Kelsey McIntosh and Paige Hauschild. In the second frame, however, USC started to take control. USC’s Spanish newcomers Mireia Guiral and Alejandra Anzar each got to the back of the cage while the USC defense silenced Michigan for a 4-2 halftime advantage. In the third, Maud Megens roared to life and tallied three straight goals to make it 7-2 Trojans before Michigan was able to manage an answer. The Wolverines got it to 7-3 next, only to see Denise Mammolito convert on a 5-meter penalty shot and Elise Stein rifle in another USC goal to get the Trojans ahead 9-3 entering the fourth. There, things slowed a bit, but USC still punched up one last goal — a Megens 5-meter that had been drawn by Bayley Weber. That would top off a 10-3 USC win to send the Trojans on to the title match. Amanda Longan would collect 14 saves for the Trojans in the win.

In the final, USC went on a tear. The Trojans shut down their rivals in the first half while piling up six goals — two apiece from Hauschild, Mammolito and Megens. With Longan again reigning supreme in the cage, USC gripped a 6-0 lead over UCLA by halftime. To kickstart the third, Aznar sailed in a sneaky shot to stretch USC’s lead to 7-0. A 5-meter penalty shot and a 6-on-5 were both converted by the Bruins next, making it 7-2, but Hauschild took care of business on the other end with her third of the game to get USC up 8-2. One more block from Longan would wrap the third with USC holding tight to that 8-2 advantage. Mammolito opened up the fourth with a ripper to get it to 9-2 Trojans. UCLA would get a shotclock-beater to go later, making it 9-3 USC with three minutes to go. Tilly Kearns would get in on the scoring action for USC with 1:32 left to nudge USC ahead 10-3 for a lead that would hold to the final buzzer.

The Trojans now turn to more action next week. USC will start up by hosting a Tuesday (Feb. 12) exhibition matchup against China before hosting MPSF newcomer Indiana for a conference clash. The Trojans and the Hoosiers will face off at 4 p.m. on Saturday (Feb. 16) at Uytengsu Aquatics Center.